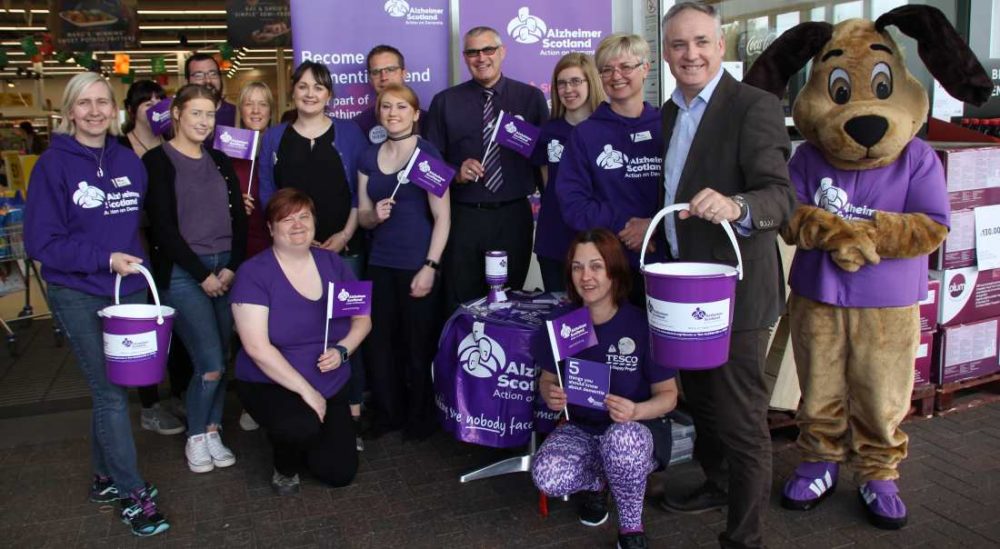 SUPPORTING THOSE WHO suffer from Dementia and their families in Moray has been grasped with both hands by staff at Tesco Forres – and their efforts have attracted world-wide interest.

As part of Dementia Awareness Week, on Friday staff at the Forres store gathered to raise awareness of the issues faced by those who suffer from the various forms of Dementia.

They were led by the store’s Community Champion Kerry Speed with support from Wendy Menzies, the Dementia Advisor in Moray, and Moray’s MSP, Richard Lochhead.

Tesco Forres last year introduced a ‘relaxed checkout’ for Dementia sufferers – the first of its kind and an idea that has attracted widespread attention, Kerry telling insideMoray: “Our relaxed checkout is going down really well – it has proven to be very popular with all our customers and the recognition it has received from the media and online communities has been amazing, for just a small thing like that to make such a big impact on the people who use it is just unbelievable.

“We have had phone calls from China, Jersey, USA and Australia – all wanting to know about how we went about setting it up, so it really has gone global.”

Wendy stressed the importance of their local event and the wider Dementia Week: “We are here raising awareness about Dementia which is really important – we estimate that there is around 90,000 people in Scotland who are living with Dementia, while here in Moray there are around 1800 people living with Dementia.

“Obviously this does not just affect the person who has the diagnosis, it affects their family, friends, carers – so it is really important that we raise awareness about the condition so that we can help support those around us.

“We have had several events this week in Moray and through all we are asking that anyone who is interested in becoming a dementia friend, could they please look on the Dementia Scotland website or get in touch with myself here in Moray and I’ll be more than happy to chat to people about it.”

Praising Dementia Moray and the staff at Tesco Forres, Mr Lochhead said: “A big well done to Tesco in Forres and their staff for coming up with the idea of putting in place the dementia friendly isle, which is more relaxed for dementia sufferers.

“I’m not surprised to hear that people not just here but elsewhere in Scotland but around the world are looking at this example.

“Dementia Week is all about highlighting the need for us all in recognising the challenges in dealing with this condition. It also helps in showing that the help and advice is out there to help people to live well with dementia, both for that who have dementia in all its shapes and forms and their families.

“Dementia is very stressful for those that suffer from it and their families, so the more that we can help in everyday life to adapt for people with dementia such as when they go shopping then the better it will be for everyone concerned.”