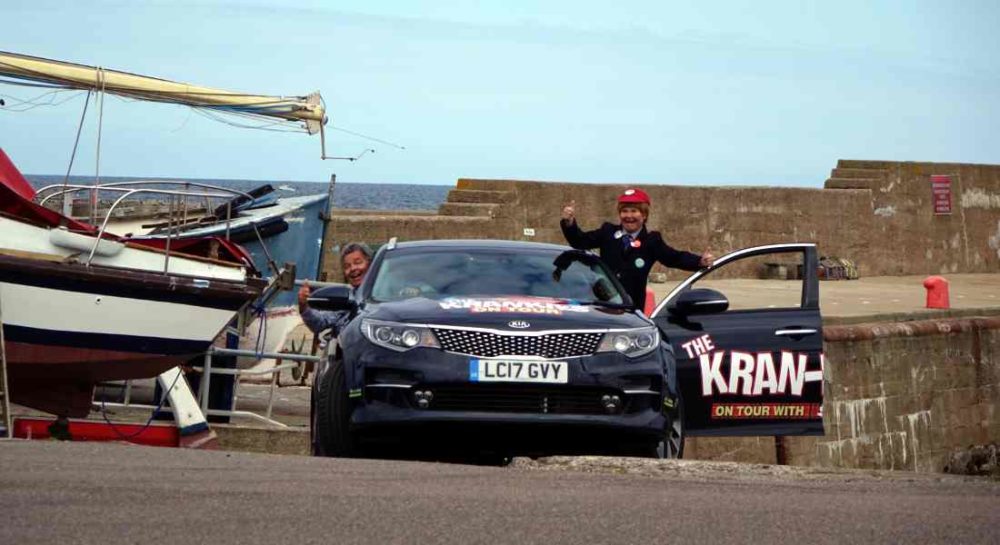 WHEN YOU POP in at your favourite café for a cuppa or take a walk along your local harbour, you might perhaps have a good evening with familiar faces.

This week, however, there have been two very familiar faces turning up at various venues in Moray – those of Ian and Janette Tough.

Who you might ask?  The Krankies of course – the husband and wife team who are both celebrating their 70th Birthdays this year – by going on a driving tour around Scotland.

So far this week insideMORAY has received reports of the pair being spotted – and still entertaining all in their company – in Lossiemouth, Buckie and Findochty.  They are doing so in a ‘Krankies On Tour’ Optima Sportswagen, donated by car firm Kia and re-badged the Kran-Kia for the purposes of their fun tour around the country.

It is all part of the Scottish Sun newspaper’s decision at the start of the year to declare 2017 as ‘The Year of the Krankie’.

Ian said: “We have not toured Scotland in years – you really do forget how beautiful the country is.”

The couple are clearly having a lot of fun if reports we have of their Moray visits are anything to go by, enjoying every minute of their tour which is aimed at putting a smile on the faces of as many members of the public as possible.

Having both actually left Scotland when they were just 18, the adventure for them is seeing much of the country for the very first time, Ian saying: “Janette and I haven’t even owned a house in Scotland. The first one we bought was in Coventry.  But they really took to Wee Jimmy as there weren’t many Scottish characters on telly. He was one of them.”

Of their current ‘tour’ Ian added: “We’re visiting parts of Scotland we’ve never heard of, never mind been to – but it’s great to be back home.”