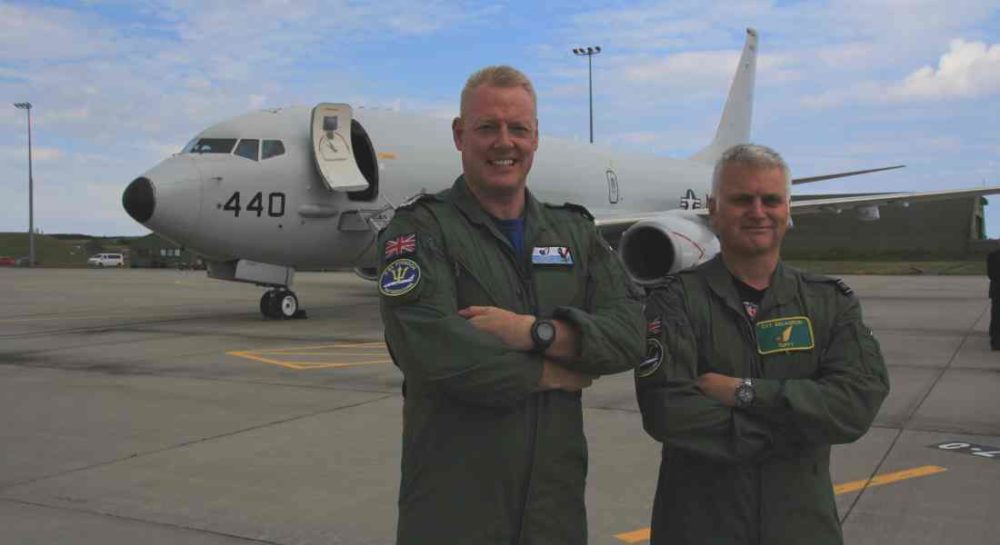 IN WHAT IS DESCRIBED as a great day for the RAF and a great day for Moray, the details of the two new squadrons that will be flying P8 Maritime Aircraft from Lossiemouth were given today.

To gasps from a few who knew the significance of the words, it was revealed in the shadow of a US Navy P8 this morning by Air Commodore Dean Andrew, ISTAR Force Commander, that CXX and 201 Squadrons would be reformed.

Both are squadrons with a significant local connection – both having flown from RAF Kinloss until the Nimrod was scrapped at the start of the decade.

Leading the first of the two squadrons – CXX – will be Wing Commander James Hanson, who like many of his colleagues announced his delight at ‘returning home’ to Moray: “It is a great day, it really is a great day – I’m delighted and honoured to be taking over as the first CO of 120 Squadron in a new era for the RAF.

Two of the airmen who have already been fully trained as ‘trainers’ themselves in the new P8, thanks to the Seedcorn project they have been involved in since 2012, spoke to insideMoray about their future roles in bringing both squadrons into full operational status.

Squadron Leader Ian Tuff and Master Aircrewman Mark Utting both have homes in Hopeman – so for them the job to be done in Moray is ‘a homer’!

Sqn Ldr Tuff said: “I’m a tactical officer on the P8 and my job primarily is instructing on the US Navy school, where we teach the US Navy and Australians to operate the P8.

“I will also be teaching the first British crews and that will start in September next year. Eventually I will come back to Lossiemouth to teach them here when we have the infrastructure in place.”

Mark Utting added: “I’ve served on both 201 and 120 Squadrons – the last time on 120 between 2007 and 2010. I have fond memories of both and it is excellent news today that we have those two squadrons coming back that have such a great heritage – and of course a great maritime aircraft heritage.

“I served on Nimrods for over twenty years before moving out to Jacksonville in 2012 – but retained a home here in Hopeman and I’m looking forward to getting back.”

Ian Tuff said that training of the first two RAF Crews to serve the new squadrons will start around September next year in Florida, adding: “We are hoping to have the infrastructure here completed around the end of 2020 so that we can start training all the crews here.

“Both the squadrons announced today will be operational squadrons, we are going to be training using the existing ISTAR training squadron.”