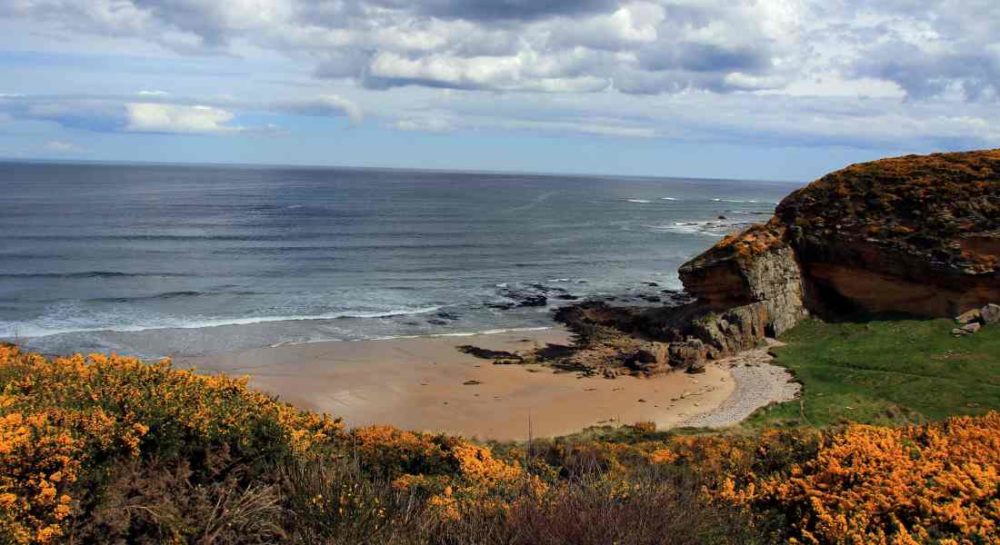 MORAY BATHED IN SUNSHINE yesterday provided the perfect backdrop at Elgin Cathedral for insideMORAY to meet up with Lord Thurso, the chairman of VisitScotland.

John Thurso has had a varied life from his early days in the hospitality industry to the House of Lords. He was elected to the UK Parliament as Lib Dem MP for Caithness, Sutherland and Easter Ross in 2001 and served for 14 years before losing that seat in 2015.

He was in Moray this week in his capacity as VisitScotland chairman, the visit part of a nationwide tour to speak with people in every region, gaining their views on Scottish Tourism –  and insideMORAY was invited to have a chat with him at Elgin Cathedral.

Looking specifically at Moray, his enthusiasm for our local attractions shone through: “The real joy is it has the potential to earn in every part of the country – so, when I visit somewhere like Moray and look at visitor centres such as Johnstons of Elgin which is fabulous and with 220,000 visitors each year, or to the Cathedral which is one of the most iconic sites in Scotland, I’m seeing modern life, modern products but with heritage and tradition.

“They all bind together to create a product for the tourist that is, genuinely, world-class.

“Then there are things like the fantastic meal I had last night at the Bothy in Burghead or the wonderful B&B that I stayed in last night, you put all that together and you really have something special.”

The tourism sector in Moray is a growing one, or some would say a recovering one – either way, it is good for the region that more people are overcoming the clear transport difficulties in reaching this part of Scotland as they are determined to see for themselves all the good things they are reading – mainly online.

“It is important not to just show visitors ‘this is lovely’ – it is because flowing out of that are good quality jobs, hopefully all-year jobs, that helps to support wealth creation and keeps people in employment,” Lord Thurso said.

He added: “It is great to see that like other areas I visited Moray is different, it employs around 2700 in the tourism sector – it has everything from iconic fishing through to modern industries and always encouraging tourism and the local destination marketing organisation Moray Speyside. So, I’m here learning on what we would wish to do from VisitScotland’s point of view.”

If there is a criticism among visitors – in particular during busy periods such as during Spirit of Speyside or Piping At Forres – it is that finding the right accommodation can be difficult. The trend for Moray in recent years is for small Hotels in particular to close their doors – a trend that need no longer be the case.

The VisitScotland chairman said: “I have noted wherever I’ve been in the hotel business that investment always repays. I believe that encouraging existing hotels to invest and improve, adapt new technologies or do things in new ways always pays off. In helping new companies to come in and build new hotels and new infrastructure also pays off.”

While heaping praise on the continuing development of the Whisky Trail, Lord Thurso was quick to agree that there was much more on offer in the region: “Moray has a lot more going for it than Whisky – but Whisky is a pretty good start.

“I know a lot of places around the world that would just kill to have the kind of asset that the Whisky Trail is.

“But there is so much more – I smile when people say that they are just discovering Moray’s seaside venues as places to come and stay. If you go back to the 1920’s and even before it was a very well-known place after the railways came and it was opened up.

“So, what goes around comes around, because the great thing is the natural assets Moray has – the coastline is the same, the beaches are the same and the sun is the same. People are rediscovering that these are all things people want.”

In closing the importance of modern technology to the industry in Moray was underlined, including local community-based online sites such as insideMORAY that do so much to paint a good image of Moray to the world.

Lord Thurso said: “In the modern world people have new ways of traveling and we have the internet that allows you to research. The internet works hugely in our favour because we have such wonderful photogenic things to offer and attract in a way that the printed brochure might not achieve.”

The full interview with Lord Thurso will appear on the launch edition of Wave Newsbeat with insideMORAY on August 4.