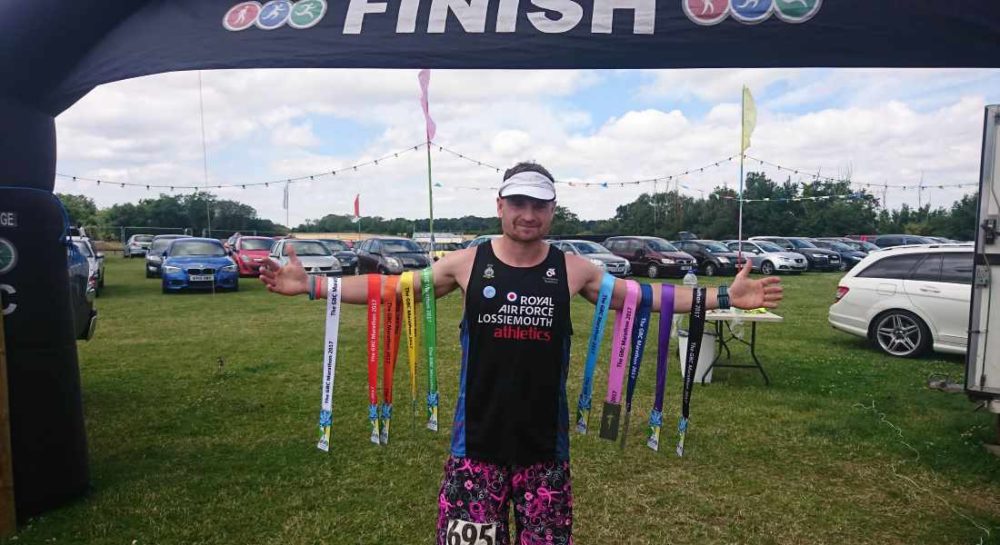 THE RAF LOSSIEMOUTH AIRMAN who set himself a daunting challenge of competing in 11 marathons over 11 consecutive days is sore – but delighted on completing them all.

Corporal Jon Ward set the mini-challenge in the middle of his even larger pledge – to complete an ‘RAF100’ – 100 marathons in a year, all for the benefit of the RAF Benevolent Fund.

The first of the 11-event challenge was part of the ‘Great Barrow Challenge (GBC) 10 in 10’ in Suffolk.

Jon said: “The event was a resounding success for me despite a minor setback on day five with injury. Overall, I finished the GBC in second place, with the second fastest set of times since the GBC began four years ago.

“My average time for the 10 marathons worked out at 3hr42mins, which I’m really happy with.

“After the GBC 10 in 10, I went down to Kent where I ran my 11th marathon on quite a challenging trail course. Despite having run 10 marathons already, I went on to win the race in 3h49m and was the only one to finish below four hours.

“I’m really pleased about my run at the GBC because I completed the challenge of running 52 marathons in 52 weeks which is something not that many people have achieved. I am now currently on 73 marathons of my marathon challenge.”

Jon must complete his 100th marathon by April 1 next year – to help with that he is running ‘6 in 6’ this November and another ’10 in 10’ in December, interspersed with individual events.

Jon is a Logistic Mover at RAF Lossiemouth but also trains five days a week to maintain the required fitness level. In his day job at Lossiemouth he is responsible for getting the right equipment to the right people on time.

This could be arranging for Typhoon parts to be sent to personnel supporting operations overseas, or receiving equipment back at RAF Lossiemouth from overseas exercises.

Jon is raising money for the RAF Benevolent Fund during his 100 marathon challenge. Anyone that wishes to support him can do so online at: https://www.justgiving.com/fundraising/Jon-Wardraf100challenge.