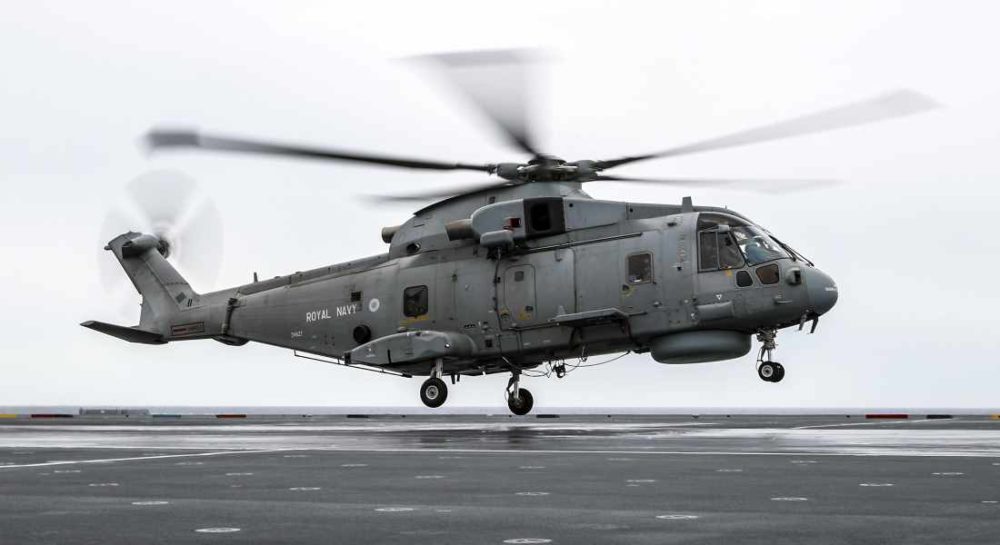 RAF LOSSIEMOUTH HAS been playing a pivotal role in a small piece of Royal Navy history involving HMS Queen Elizabeth.

The Navy’s new aircraft carrier is undergoing sea trials off the north east coast over the last few days – while a Fleet Air Arm squadron has been settling in at the Moray base to assist in a series of tests.

Included in these was the first landing of an aircraft on the deck – and that honour fell to a 26-year-old pilot, Lieutenant Luke Wraith, who landed his Lossiemouth-based Merlin helicopter on the deck of the future flagship.

“I was pretty nervous – not about making a safe landing, but knowing that every other pilot in the Navy would watch the footage and critique it,” said Lt Wraith, of 820 Naval Air Squadron.

He added: “I’m actually quite surprised it ended up being me because I only got my flying wings 18 months ago – I was expecting it to be someone much more senior.”

Watching the historic landing from the ship’s ‘aircraft control tower’ – called the Flyco – in the rear of HMS Queen Elizabeth’s two islands – was the man in charge of all her flying operations, Commander Mark Deller. His team trained around the world – on simulators, on US Navy carriers and on a mock-up flight deck at RNAS Culdrose in Cornwall – to ensure they were ready for the first helicopter.

Cdr Deller said: “I sense all my team are pleased to be off the wall and back at sea, doing what we do best.

“There are smiles everywhere on deck and that’s a good sign. Operating live helicopters adds another dimension to our understanding of how our flight deck behaves.

“We’ve proven our initial ability to operate aircraft safely. Now our focus is getting the ship and all her systems fully tested and set to work ready to commence full fixed wing flying trials next year.”

The squadron will be assigned to HMS Queen Elizabeth throughout the carrier’s 50-year lifespan, protecting the ship against any submarine threats, and flying personnel and equipment on and off.

Normally based at Culdrose, 820 Naval Air Squadron is currently operating from RAF Lossiemouth – it has been training for more than 18 months for its mission with the 65,000-tonne warship, including a period at the Moray base earlier this year.

For the historical record, there were five people in the first aircraft to land on the new carrier. Lt Wraith was joined in the cockpit by his squadron’s senior pilot Lt Cdr Steve Moseley, observer Lt Chris Bugg and aircrewmen Petty Officers Nigel Stockdale and Jonathan Holding. “To have a ‘first’ in your log book is very special, but to have the first landing on the largest warship ever built for the Royal Navy is something very special indeed,” said Lt Cdr Moseley, a graduate of the US Navy’s Test Pilot School.

“We were the final link in the chain in a process that has involved thousands of people all working very hard towards this iconic occasion.

“The challenge for us was to be prepared for any eventuality, but also to have faith in the team whose job it has been to ensure that carrier aviation is as safe as possible.”