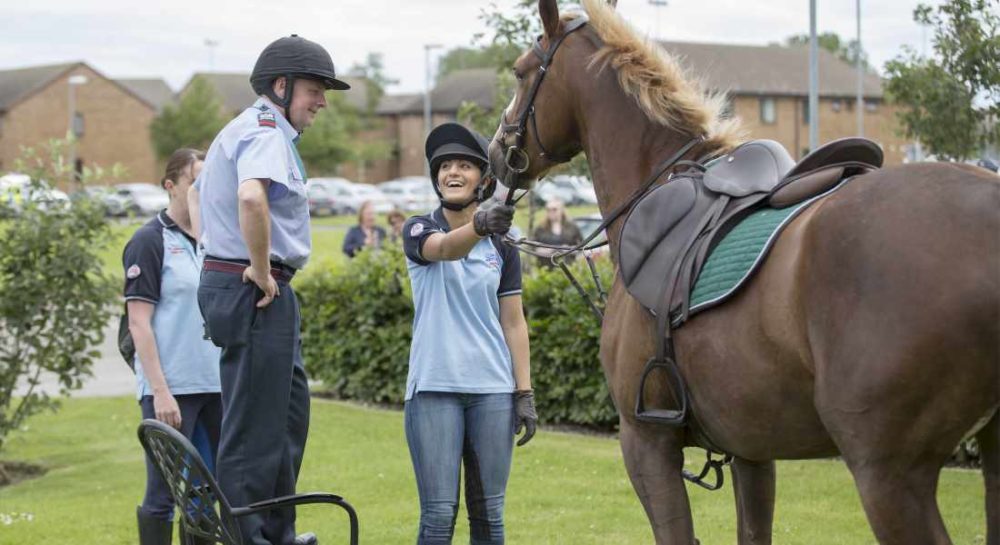 TRADITION HAS BEEN SERVED by an RAF Lossiemouth Warrant Officer who has finally called time on his 38-year service career.

It is incumbent on retiring RAF WO’s to make their final departure in an unusual manner – for Ken Prentice that turned out to be parading around the Moray base on the back of a horse.

Not a major task in itself perhaps – but Ken has a fear of horses – and perhaps justified this time on an active air base that can be noisy enough to spook wary humans, far less an unwary horse!

However, he was in good hands as ‘Red’ was led by Corporal Kerry Norgate and Miss Aneesa Parry from the Lossiemouth Saddle Club. Red and WO Prentice made their way past Station personnel, including the Station Commander Group Captain Paul Godfrey, to be met by family and friends at the Station exit. WO Prentice was thrilled to have challenged his fear of horses on his last day in uniform. He said: “When I joined the RAF Police in 1979 I could never have envisaged just how diverse a trade the RAF Police would become- and the tangible impact that the RAF Police make on operational Deployments world-wide.

“The RAF Police JNCO of today is highly adaptable and employed in so many differing and important roles. I have enjoyed every minute of my time serving in the RAF.

“Personal highlights have been representing the UK within the NATO Counter Intelligence World, being appointed WO Counter Intelligence Squadron, fulfilling the role of Principle Security Adviser to the UK Maritime Component Command in Bahrain on 3 operational tours and being Warrant Officer No 4 RAF Police & Security Squadron based at RAF Lossiemouth. “I am genuinely sorry to be leaving the Royal Air Force but hope that I can find a Reserve role that will allow me the opportunity to continue to support the RAF.”

Ken added that he was truly humbled to be led off the unit on what must have been one of the largest horses he had ever came across. He continued: “To see so many Station personnel present led by the Station Commander, to witness the occasion – I couldn’t believe that in my last few hours I had to overcome my biggest fear and mount such a large horse.

“I had no idea that anything had been planned as it was my intention to leave quietly.”

WO Prentice’s career began when he joined the RAF in November 1979. Over the 38 years of his career he has been posted to several bases across the UK, Germany, Belgium and the Ascension Islands. He has also served on operations in Afghanistan and the Middle East.