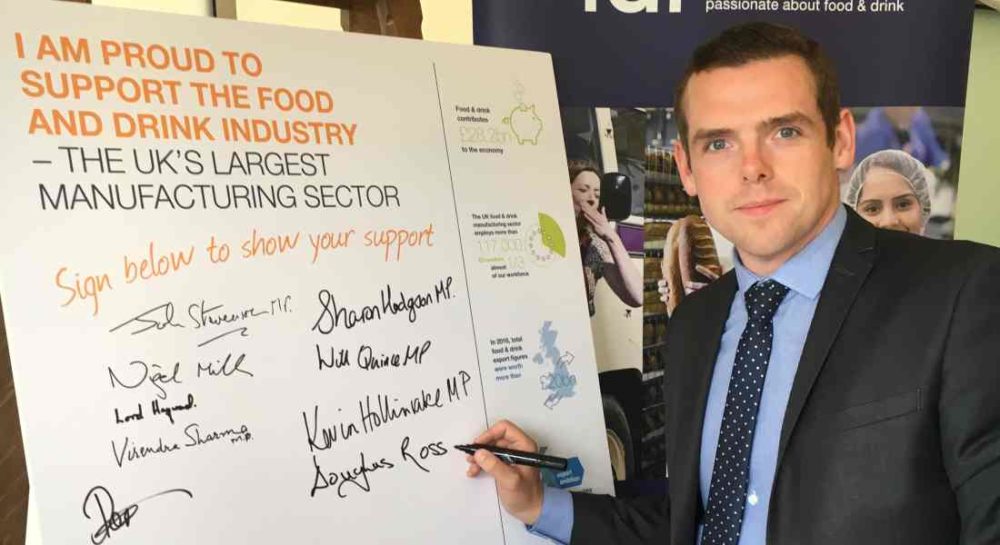 MORAY’S MP HAS TAKEN the opportunity this week to fly the flag for Moray’s food and drink industry when he was asked to attend a reception promoting the best of British at Westminster.

Hosted by the Food and Drink Federation, the reception was designed to allow MPs to meet with representatives from companies around the country involved in food and drink production.

“This was an excellent opportunity to meet with individuals and companies who are closely involved in the UK’s food and drink sector,” Mr Ross said, adding: “This is a hugely important industry for Moray and Scotland and provided an excellent opportunity to discuss the good work that is being done by the food and drinks sector to help promote businesses.”

The industry is the largest in the UK’s manufacturing sector and one in which Moray excels, creating some of the very best products available in the country.

Mr Ross added: “I was more than happy to sign the pledge to show my commitment to the sector and this campaign. Food and drink is an extremely important industry for all of us here in Moray.”

Meanwhile the MP welcomed the news that Maria McLean had won the Elgin City North Moray Council by-election for his party, saying: “I am absolutely delighted for Maria and her campaign team who have worked extremely hard to secure this seat.

“It was great to be out with Maria campaigning in Elgin North and we have seen a further increase in the Scottish Conservative vote of five per cent since May. Maria went out and about meeting constituents and discussing issues with them that mattered to the local community. I know that contributed to her success.

“Maria has made it a perfect ten for the Scottish Conservatives in Moray this year. Including my own success at the General Election, we have had ten conservative candidates and ten victories. That is down to a lot of hard work by our local volunteers and the support of people across Moray.

“It is important that we continue to work hard for local people and repay the trust they have placed in us all. I look forward to working with Maria to ensure we get the best deal for people in Elgin North and everyone across Moray.”