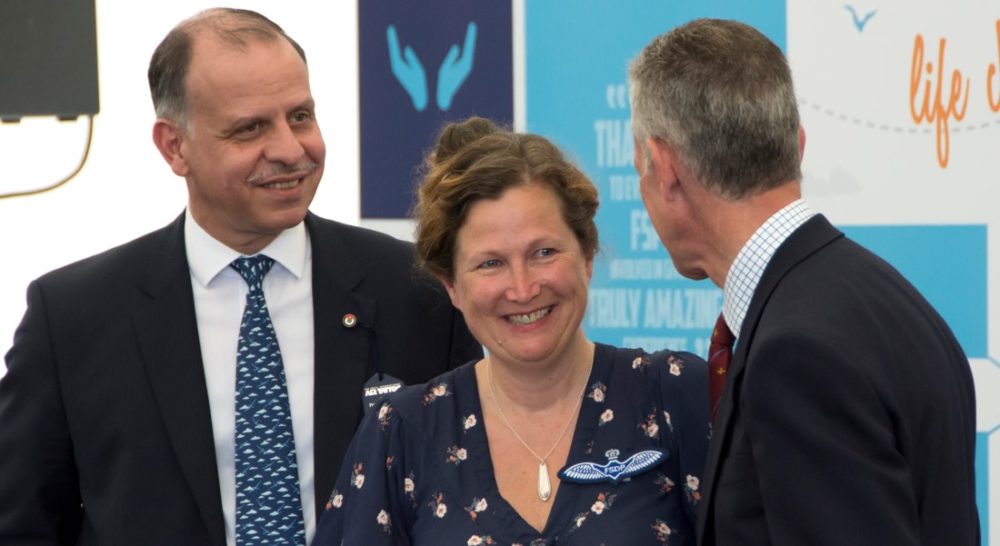 A MORAY MUM who has undertaken her own battle against the disabling Ehlers Danlos Syndrome (EDS) has been honoured in the name of a pioneering female aviator.

Lossiemouth’s Karen Cox, who is well known in Moray as a fundraiser for the Royal Air Force Benevolent Fund, took on her biggest ever challenge just over a year ago – enrolling for the Flying Scholarships for Disable People (FSDP), a charity set up in 1983 in memory of WWII legend Group Captain Douglas Bader.

Their mission is to inspire disabled adults, building their confidence, self-esteem and future aspirations through the sharing of life changing aviation experiences.

Those who undertake the FSDP scholarship have one thing in common – they refuse to allow disabilities of any kind get in the way of meeting challenges – in this case, learning to fly. Karen completed her flight school course by taking to the air with family members sharing the moment from the back seats.

It was when she returned south last month to officially receive her ‘wings’ from the charity that a major surprise awaited – when she was also awarded the FSDP’s ‘Wings Around the World’ Trophy, presented annually to “the female scholar who, inspired by the achievements of Polly Vacher, showed the highest determination to achieve success in her attempt to learn to fly”.

Polly Vacher is an English aviator who specialised in long-distance solo flying. A physiotherapist, Polly obtained a private pilot licence in 1994 in Australia – and immediately set about circumnavigating the continent. Three years later she toured the United States by air – flying solo over the North Atlantic in both directions.

Karen was awarded her scholarship from the RAF Charitable Trust and completed her three weeks of flying with John Griffin of Gryphon Aero Club at Cotswold Airport in July last year. Before her scholarship she was reluctant to even be seen as disabled – and would avoid using her wheelchair or mobility scooter locally.

She also struggled with self-confidence and anxiety meaning she rarely went out alone and was too anxious to even drive into Elgin. “The whole process of learning to fly and being so far out of my comfort zone was extremely daunting, but it seemed to completely reprogram my brain,” Karen said, adding: “When you are taking off in an aircraft, you can’t start worrying about the landing, so I have learnt not to overthink things and take everything one step at a time.

“That process has helped me manage my anxiety and knowing I can fly an aeroplane has given me the confidence to challenge myself with other things.”

Such was the confidence gained from learning to fly with the FSDP, Karen found herself able to do things that before seemed simply impossible to her – including taking an overseas holiday in Malta.

Alongside the honour of receiving the Wings Around the World trophy, Karen was presented with her ‘pilots wings’ by His Royal Highness, Prince Faisal Bin Al Hussein of Jordan and the RAF’s Chief of Air Staff.

Following the presentation at the Royal International Air Tattoo, Keith Bayliss, FSDP’s chairman, commented: “The Wings around the World salver is awarded each year to a female scholar to whom the Trustees feel has achieved the most from her scholarship.

“As you can imagine, determining the scholar who has achieved the greatest life changing experience is very difficult as, without exception, we watch as each and every one of our scholars goes on to ‘reach for the sky’. However, we felt that although Karen appeared outwardly confident, she was struggling at the start of her scholarship to even accept her disability.

“Since completing her flying training she has continued to accept and take on new challenges, holidaying abroad being just one thing she had been apprehensive about doing before.”

Karen summed up the last year by telling insideMORAY: “I cannot even begin to put into words the difference FSDP has made to my life, it has literally opened the doors to my world.

“Taking my family flying has to be the coolest thing I have been able to do and if I can inspire just one more disabled person to apply for a scholarship, then I will be very happy. Once you reach for the sky, life is never the same again.”

To find out more on Flying Scholarships for Disabled People, visit their website.

Closing date for this year’s applications is November 30.