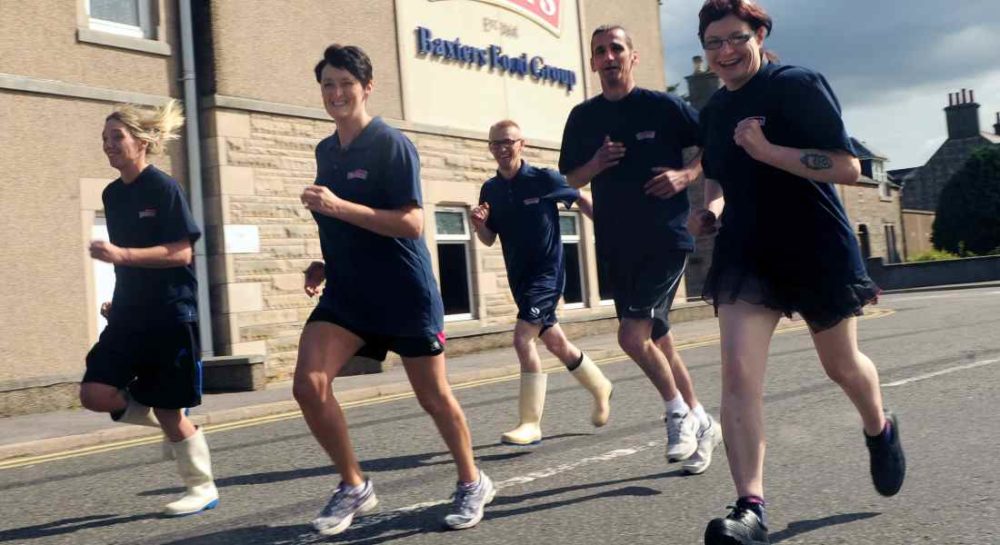 A GROUP OF RUNNERS appear to have come up with the perfect recipe to gain a competitive edge in the forthcoming Baxters River Ness 10k Corporate Challenge.

Teams from the Fochabers-based firm have already been tucking into a new range of healthy soups designed to get them in tip-top shape for when they limber up against staff from businesses across Moray, the Highlands and beyond.

Baxters – which is title sponsor of the Loch Ness Marathon and Festival of Running – has 25 entrants in total, 15 of which will be running in the 10K Corporate Challenge – an event which one of its teams finished in second place last year.

But they hope they might go one better than that on September 24 thanks to the firm’s new Hearty and Super Good soup ranges which combine health-boosting ingredients along with protein to help aid muscle strength and repair.

The runners from the food firm also have another good reason to pound their way around the course on the banks of the River Ness – they are using the 10K event to raise money for the Lossiemouth-based Ladybird Development Group for pre-school children who require additional support in their development.

Baxters will have employees taking part in all of events on the race day programme, from the 26.2 miles of the marathon to the Wee Nessie event for pre-schoolers.

Group human resources director Clyde Marwick, who has been a part of the Baxters team in the past, said: “The 10K Corporate Challenge is a hugely popular event with our staff as it’s a really fun way of getting people active.

“That said, as the event gets closer, it does start to get very competitive too with an internal battle for bragging rights. There have been lots of secret training sessions, whispered conversations about team tactics, and of course there is a big focus on diet and eating healthily – anything that will help take precious seconds off their time.

“In all seriousness, it is a fantastic event and a great way for our staff to enjoy a healthy diet, active lifestyle and do some great fund-raising work for the local community.

“These soups have been released at the perfect time to be eaten as part of a training regime, but they are meant to be enjoyed by anyone whether or not they are focused on a healthy lifestyle.”

The range of Hearty soups has around 20% of the recommended daily adult requirement for protein, as well as up to three portions of the recommended five pieces of fruit and veg a day. The Super Good range includes ingredients that have proven health-boosting ingredients, such as ginger and turmeric which are known for their anti-inflammatory benefits.

There will be an opportunity for runners – and spectators – to try the range of soups for themselves. Participants will receive a tin of Hearty soup in their finisher goody bag, and one of the flavours from the range will be served up for the complimentary soup and roll which all runners receive post-event.

The Super Good range will be available to sample at the Baxters Food and Drink Fayre, which is just one of the attractions at the Event Village based around the finish line at Bught Park in the centre of Inverness. There is also a Sports Expo, live music and children’s entertainment.

Corporate Challenge teams can have between four and six members, and companies can enter more than one team if they wish. The times of the fastest four finishers will count towards the team’s overall combined time.