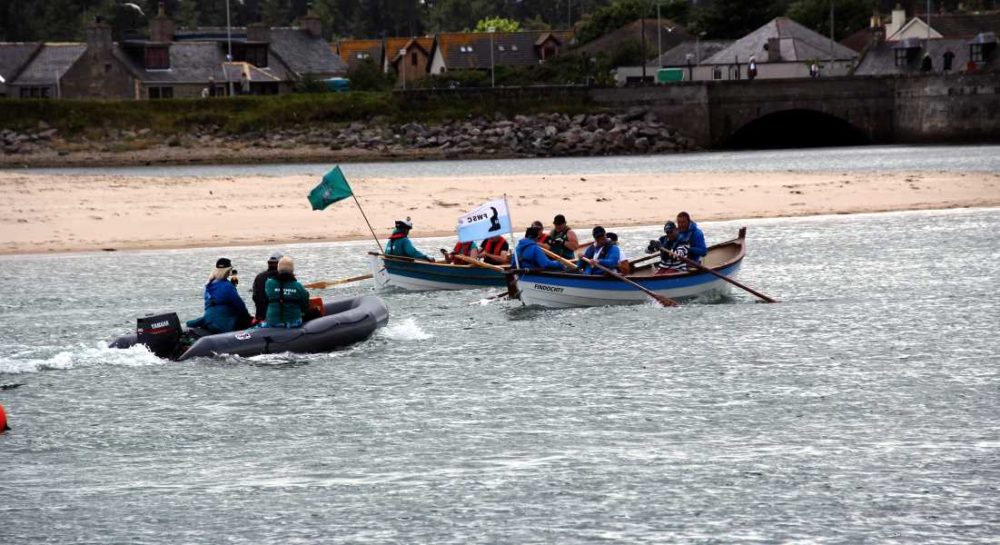 VISITORS TO LOSSIEMOUTH this weekend for the much-anticipated return of the town’s annual Raft Race are being urged to arrive early – and not miss a special treat.

The return of the event on Sunday has generated an even higher than usual level of excitement following the disappointment in 2016 when high winds forced a late cancellation.

Thousands flock to the coastal town each August for the event – and ahead of Sunday, local councillor John Cowe is urging them to arrive early as a pre-race rowing demonstration has been arranged between two traditional Moray ‘Skiffs’.

Rowers from Findochty and Burghead will return to the river to compete in a light-hearted demonstration race of their boats, two of a growing number of traditional Skiffs being built and rowed by coastal communities around Scotland.

While a new rowing team is preparing their own Skiff in Lossiemouth, the Burghead and Findochty rowers have agreed – at the invitation of Councillor Cowe – to put on a demonstration of what these boats are all about.

Councillor Cowe said: “The Skiffs were in action at the Lossiemouth Seafest last month and it was suggested to me that this might perhaps fit in very well with the Raft Race.

“I’m delighted to say that both the Burghead and Findochty crews agreed to return, with the result that the Skiffs will be launched again on the river at around 1pm on Sunday.

“Most people are around long before then ahead of the main event – but I would people to get down to the river early for the Skiff race, which is likely to be at around 1.30pm – providing the perfect prelude to the Raft Race itself at 3pm.”

The Burghead Coastal Rowing Club was formed in 2013 and were the first to build and launch their Skiff – the Tarbh Uisge – a year later, the first traditional boat to be built in the town in 150 years. The Findochty Skiff, ‘Morag’, was launched in 2015.

Plans for the new Lossiemouth Rowing Club to build their Skiff were revealed by insideMORAY in January this year.