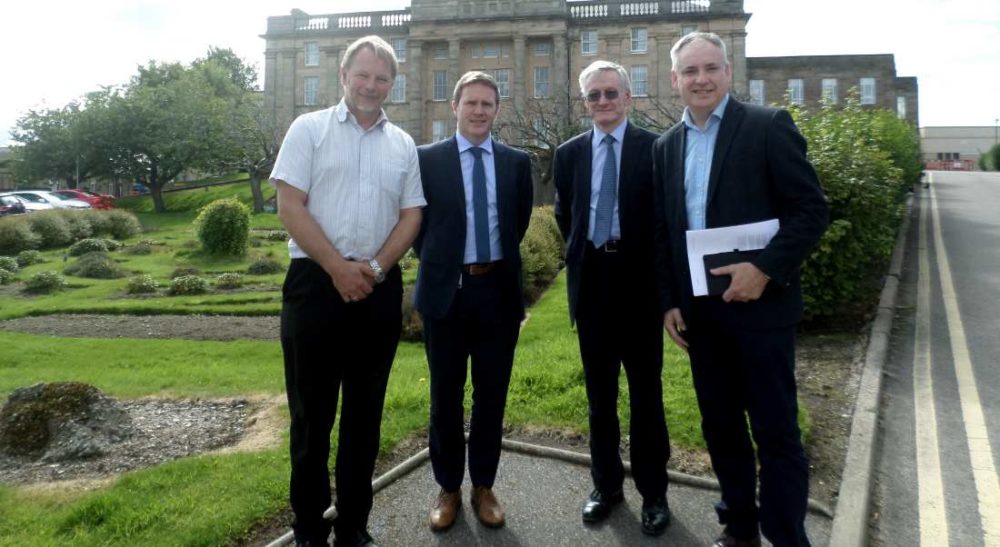 MORAY MSP RICHARD LOCHHEAD has chaired a meeting with the director of medicine at NHS Education Scotland to discuss unfilled junior doctor vacancies at Dr Gray’s.

The MSP has been reacting to staff shortages at the Moray hospital which recently threatened to close the Maternity Unit – and this week will see in-patients suspended from paediatric unit.

Over 6000 people have now signed a petition in protest to the closure of the paediatric unit to overnight patients, leaving worried parents with the prospect of their children requiring hospitalisation having to travel to either Aberdeen or Inverness.

Mr Lochhead met with NHS Grampian management to discuss the challenges facing the ward, pressing the importance of having a fully functioning children’s ward at Dr Gray’s. He has also invited the Health Secretary, Shona Robison MSP, to visit Dr Gray’s.

Moray’s MSP called the meeting with NHS Education and Dr Gray’s staff in light of these recent difficulties to fill posts for junior doctors – and to explore whether Moray’s general hospital could be designated as a centre for rural education, which has proved beneficial in recruiting in other parts of Scotland.

Speaking after the meeting, Mr Lochhead said: “I’ve been contacted by many constituents who are concerned at the decision taken by NHS Grampian with regards to overnight admissions to the children’s ward at Dr Gray’s.

“People care deeply about the children’s ward and there is strong support in the community for round the clock services to be reinstated as soon as possible.

“NHS Grampian has made it absolutely clear to me that the decision has been taken to ensure patient safety and that they are working hard trying to find a solution that will mean overnight admissions will return to Elgin.

“It is in no-one’s interest for children to be travelling long distances for care, and I have been assured that NHS Grampian will do all they can to minimise the impact on patients and provide support to families who do need to travel to Inverness or Aberdeen, whilst they try to fill these posts.

“NHS Grampian has faced ongoing difficulties recruiting people to come and work in our hospitals, which is what has led us to the position we’re in now.

“The situation at Dr Gray’s is caused by there being more vacancies than there are doctors to fill them, which is a challenge facing health boards across the country, despite Scotland having the highest number of doctors currently working in the NHS compared to recent years.

“Unfortunately, changes to rules around trainee doctors coming from overseas by the UK Government in 2006 has also had a huge impact and has meant that vacancies that would have been filled in the past are left as gaps in the system.

“Steps need to be taken to identify a solution in the short and long term to ensure the children’s ward and Dr Gray’s as a whole has the staff it needs to serve our communities to its maximum capacity.

“Staff at Dr Gray’s do a fantastic job under a huge amount of pressure and it is vital that NHS Education and NHS Grampian find solutions to these ongoing staffing challenges. I am in constant contact with NHS Grampian as they try to fill the vacancies in the children’s ward and to reinstate a 24-hour service in Elgin.”

The row over the paediatric unit at Dr Gray’s comes as a study by the Royal College of Paediatrics and Child Health (RCPCH) revealed that a quarter of children’s wards and more than 40% of baby units in Scotland are facing staff shortages.

Around one quarter of paediatric inpatient units were forced to temporarily close in figures that are based on the most recently available statistics for the year to October 2015. RCPCH is now calling on the Scottish Government to fund additional trainee doctors to address gaps in hospital rotas and prevent closures.

Currently, there are 310 paediatric consultants working in Scottish hospital – RCPCH say that should be increased by between 84 and 110 posts if standards are to be met.

Steve Turner, RCPCH’s officer for Scotland, said: “Time and again we see rota gaps in paediatric services causing significant strain on the system – and these figures show that staffing shortages are leading to service closures all too often.

“The number of consultants is increasing in Scotland and between 2013 and 2015 we saw the paediatric consultant workforce grow by more than 13%. The target for consultants in Scotland though is for a further 27% to 35% – so there is obviously a long way to go.”