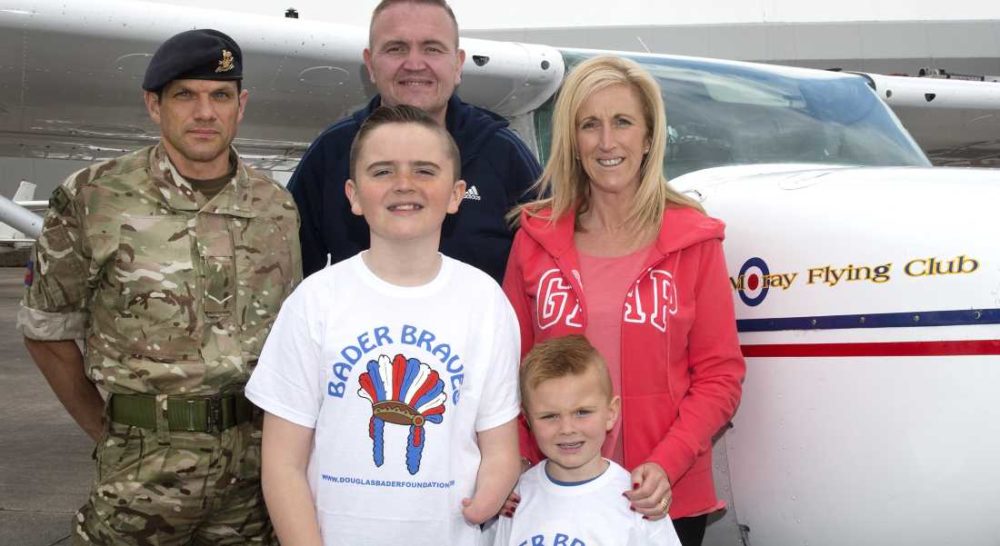 TWELVE YOUNG PEOPLE have been attending the annual ‘Bader Braves’ aviation day at Kinloss Barracks – with their parents and carers taking the total to 35 visitors on the day.

Bader Braves Aviation Days are an initiative of the Douglas Bader Foundation which provides support and activities for young people with limb disorders or other disabilities.

A total of 31 flights were carried out by six volunteer pilots from Moray Flying Club using three of the club’s aircraft. The youngsters and their families were flown around north Moray – their sorties left Kinloss heading south east, skirting Elgin and then heading north to Spey Bay before returning west along the coastline via Lossiemouth.

The event was also supported by the RAF Fire Section, who brought along a fire appliance, and the Coastguard Service who landed one of their helicopters at the Barracks. The children and their families were invited to get in the fire engine and helicopter and speak to the crews about their jobs and the equipment on show. The ‘Bader Braves’ and their families also visited the Morayvia Aviation Centre in Kinloss.

George Mackenzie is the Bader Braves Day co-ordinator for Moray Flying Club, he was delighted with how the day went. He said: “It was wonderful to be able to give all of the ‘Bader Braves’ an exciting and challenging day out with Moray Flying Club. Everyone seemed to enjoy themselves. Hopefully we’ve shown the children that they can try new things, and maybe think about other challenges they’d like to take on.”

One keen ‘Bader Brave’ was Ryan Gregson, 11, who visited Moray with his brother Callum and parents Stephen and Debbie. The family travelled from Cambuslang to enjoy Moray Flying Club’s Bader Braves Day.

The ‘Bader Braves’ events were initially brought to the family’s attention by ‘Finding Your Feet’, a charity that supports families affected by amputation of limb difference. Other ‘Bader Braves’ hadn’t travelled as far, coming from Inverness, Lossiemouth, Burghead, Hopeman and Buckie for the event at Kinloss Barracks.