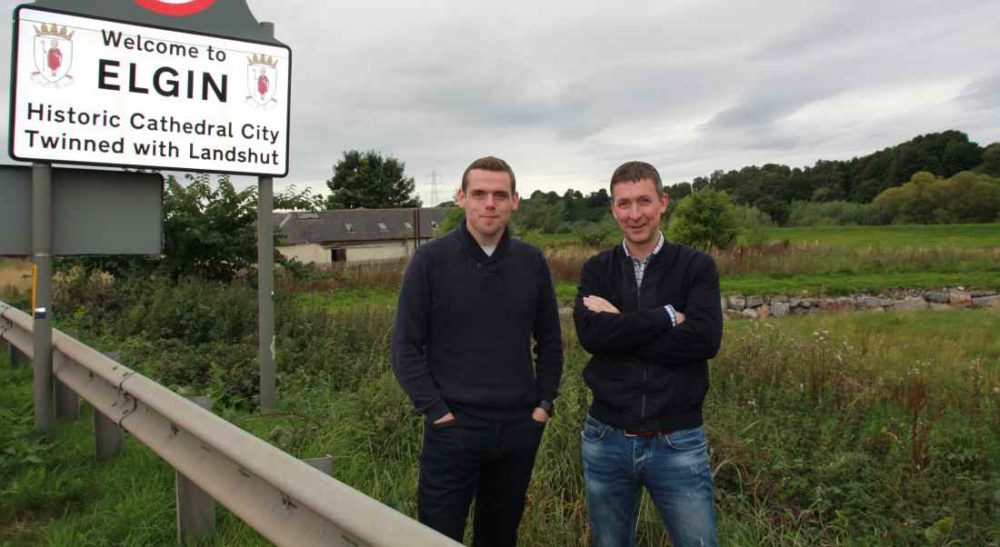 Moray’s MP Douglas Ross has this week added his voice to those who back plans by Lossiemouth-based Grampian Furnishers to expand their operation to a new purpose-built store on the outskirts of Elgin.

A planning hearing is being held in October where planning committee members in Moray will hear arguments for and against allowing the new store to be built just off the A96 on the outskirts of Moray’s main town.

Douglas Ross took a look for himself at the proposed site and had no hesitation in supporting the bid for the new store – and urging planners to do likewise.

Mr Ross said: “Grampian Furnishers is a local business that has a very proud history in Moray and is now seeking to treble in size. I think that we should be doing everything possible to encourage local businesses who are looking to provide a great service from the outskirts of Elgin.

“I also think that if we should not put any restrictions on those local businesses who want to expand, who want to increase their employees and offer a better service to people in Moray, we should be supporting that.

“I know that there has been some opposition from Elgin BID – what I have said to those who have contacted me about this is we can make improvements in the centre of Elgin, we can do as much as possible to encourage other retailers to move into the centre.

“But for those who cannot fit into a shop premises in Elgin we should not use the fact that they are coming outside the centre as being the be all and end all and say that they cannot get planning permission. So I hope when this does come up for approval at the planning hearing in October that councillors will see the great benefits that come from this planning application.”

Asked if he understood the reasons why most of the opposition for the plan is coming from Elgin’s Business Improvement District, Mr Ross added: “I can understand that as an organisation with a focus on the town centre of Elgin that BID do not wish to see establishments outside the centre.

“They want to encourage people to be spending money in the centre of town – but this is a shop that would not work in the middle of Elgin.

“The owner, Royce Clark, has said that there are no suitable premises in the centre, but he wants to keep the business in Moray and in Elgin if possible – and this happens to be the best venue. And when you look at the current state of this site, I believe that a brand-new shop with a café will be a real attraction to come into Elgin.”

Mr Clarke has welcomed the support from the MP, saying: “The level of support received to date from throughout Moray really has been amazing, as is having the backing of Douglas because not only is he my MP he is a customer as well.

“I’ve asked Richard Lochhead MSP for his backing as again, not only is he my MSP he is also a customer, thankfully this is not a political issue as we have had enough of that this year to last a lifetime.

“I think it’s clear that all the support we have received from members of the public, customers, fellow business owners and politicians shows that what we are trying to do can only be of a huge economic benefit to the area.

“More importantly from the feedback we have had from the thousands that have signed the petition it is clear the public are saying this is very much needed and that they actually want this for the area.”