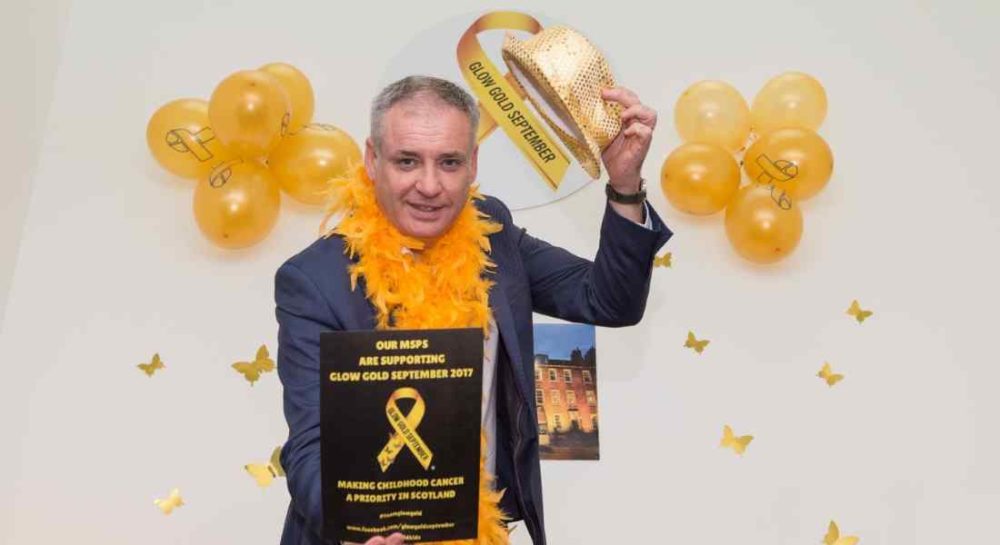 MORAY MSP RICHARD LOCHHEAD has been meeting with the parents and grandparents of children with cancer – some of whom have already lost their child.

Mr Lochhead met the family members at the Scottish Parliament as they sought to raise awareness during the ‘Glow Gold’ September campaign (#goldtastic).

Buildings throughout Scotland, including Victoria Quay, Stonehaven War Memorial and Glasgow Queen Elizabeth Hospital, are just a few iconic institutions who are lending their support to the campaign by lighting the skies gold this September.

Mr Lochhead joined fellow parliamentarians in Holyrood to encourage people across Scotland to get involved and help support Glow Gold September’s efforts, helping to ensure that parents and GP’s are aware of the signs of childhood cancer through a national awareness campaign.

The MSP said: “Cancer is the number one cause of non-accidental death in children, yet it is too often misdiagnosed, resulting in a poor prognosis for many children.

“The Glow Gold September campaign is a fantastic opportunity to join together to raise awareness of this devastating disease during the month of September and I am delighted to support the cause.

“I would ask that local schools and children’s groups support this worthy cause by considering hosting a ‘Glow Gold for a Day’ event where everyone can get involved and help promote this potentially lifesaving campaign.”

“We hope to promote the early warning signs and symptoms of cancer in children through the ‘Be child cancer aware’ and ‘Headsmart’ awareness cards. It would be #goldtastic if everyone can take a moment to help.”