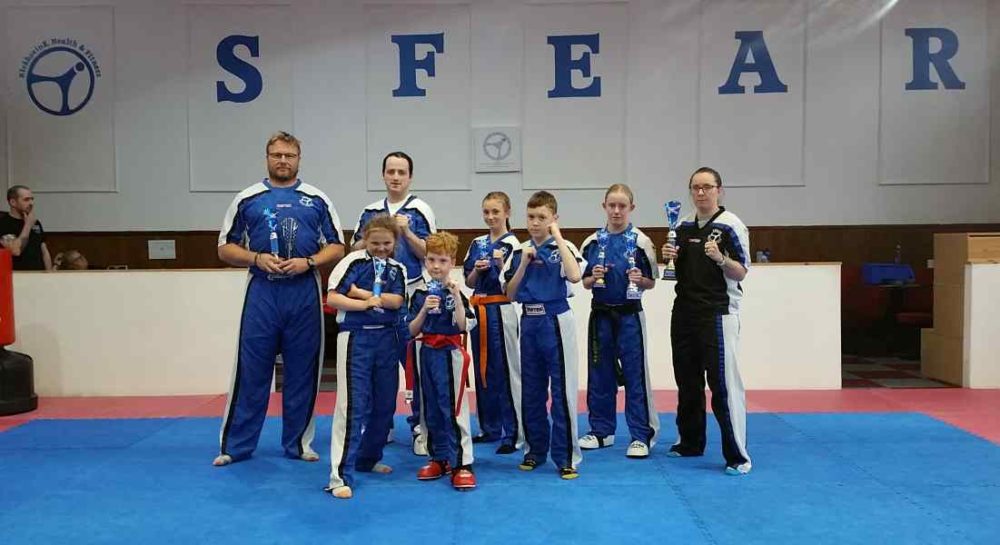 A MORAY KICKBOXING CLUB has had several of its members competing at a high level in the recently held Arbroath Open – and returned with 12 medals between nine fighters!

The Lossiemouth-based SFEAR team took four gold medals, five silver and three bronze from a squad that was made up of both novice and advance fighters.

Leading the team was Jason Fletcher who said: “The Arbroath Open is a good club level competition that allows fighters to try different techniques and strategies in a friendly and yet still competitive atmosphere.

“Our first-time Chloe Scott from Lossiemouth High School managed to take a bronze in a novice section – it was her first competitive set of fights so we are very proud of her performance.” Scott Russell missed out this time but Lahra Gauld took gold while Jason Fletcher came away with two silvers. Both Troy and Scott were knocked out in the first round to the eventual winners of their sections. Scott’s fight was against a multi-World Champion at Full, Semi and Light Contact form’s and should be very proud of how he acquitted himself.

Jason said: “Isla Ross won her section and we were very pleased to see her up her game and also come second in the under 12 year old girls Open weight as well.

“Having won the WKA English Open and silver last weekend, Rebecca Ross was looking to improve her performance as she approaches the World Championships in October. She won her points category and a silver at light contact, where she gave too much weight away to a powerful opponent in the final.

“Ellie-Mae Scott and Lahra Gauld fought each other in the Light Contact final. This was a big step up for Ellie-Mae who had to fight her longstanding instructor for the first time at a competition. Lahra’s experience paid off to see her secure Gold and Silver for Ellie-Mae.

“Oliver Shevill came third in his very large section where is making steady progress ahead of stepping up an age category next year.”

Jason Fletcher was himself looking to improve his performance from his Gold at the WKA English Open last weekend. He won two Silvers at Points Fighting and Light Contact in a sizeagle Veteran Sections.

Overall the six SFEAR fighters going to the World Championships in October made some improvements in performance – and were able to try different techniques and strategies with success.

Jason said: “We are now looking forward to the WMKF 3 Series and Forres Charity Open at the start of October as well a number of WKA Squad Training Sessions in Glasgow before they see if they can bring Gold back for Scotland.”