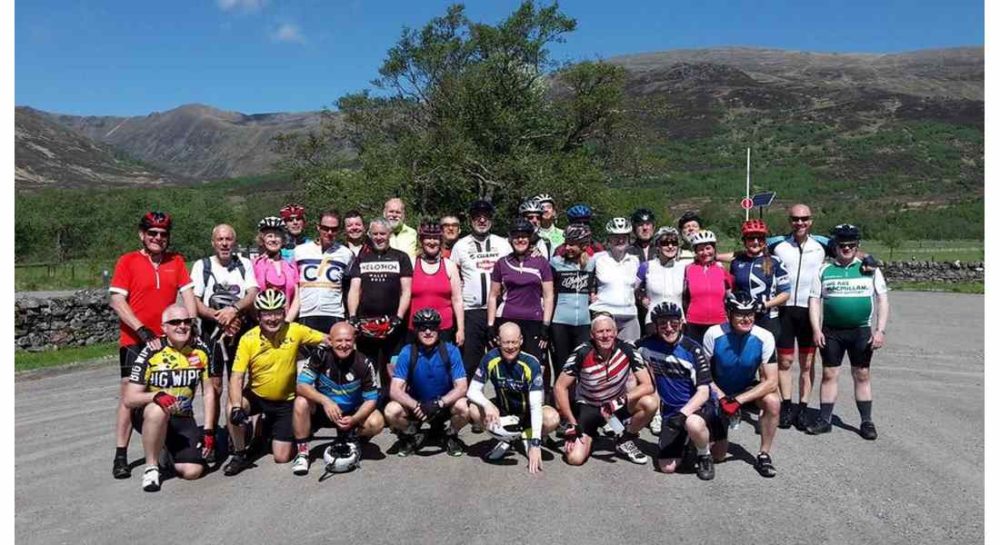 A GROUP OF CYCLISTS are proving that age is no bar to taking on gruelling challenges in aid of something they firmly believe in.

Moray Wheelers have over the last five years taken on a series of cycling challenges, heading out to the Scottish West Coast and Outer Islands – and raising over £65,000 in the process for Cancer Research UK.

Inspired by the memory of his son Scott who died after being diagnosed with a rare type of bone cancer fifteen years ago, Walter Sutherland, persuaded his fellow Moray Wheelers to join him in a series of challenges to raise life-saving funds for Cancer Research UK.

Moray Wheelers are a large mixed group of friends from the local area who get together every week to enjoy a social cycle together. A considerable number of the participants are “very young pensioners” and the oldest person completing the majority of the annual challenges is 77 years old!

Walter, from Lossiemouth, said: “Cancer is a devastating disease and of course Scott’s death hit my family hard. As the 10th anniversary of Scott’s death approached, I wanted to do something fitting in his memory that would raise money for Cancer Research UK to help scientists in their work to improve treatments.

“I had little problem persuading my fellow Moray Wheelers to join me in supporting this very worthwhile cause. Each of us has taken part in these challenges for different reasons but Cancer Research UK is a cause that resonates with all of us. Unfortunately, we have all been touched by cancer in some way.

“When we started these fundraising challenges we expected to maybe raise around £10,000 in total. We have surpassed that in some style and it was a great thrill for me that we broke through the £65,000 mark – particularly as we achieved this just two days before my 65th birthday. This great achievement is down to the Moray Wheelers, their friends and families and the local Moray community who have supported the charity so well over the past five years.”

Walter recalled that his son had been an outgoing Forres Academy pupil when he became unwell and tests revealed he was suffering from Ewing’s sarcoma, a type of bone cancer which is most often diagnosed in teenagers or young adults.

Sadly, Scott died on the 30th September 2002, less than five months after he was diagnosed with cancer.

Walter added: “Scott was a fit and healthy lad who loved football and played for Forres Mechanics Boys Club until he was diagnosed with cancer. He would have been so proud of the efforts of everyone in the Moray Wheelers who have really gone the extra mile to raise this money for Cancer Research UK.

“These various challenges saw us cover over 1700 miles in total and were certainly no picnic – they tested even the fittest amongst us. We braved head winds, hail, heavy rain and a lot of stiff climbs as we battled our way around the five different routes we undertook.

“When we decided to undertake these challenges our two priorities were firstly to raise as much money as we could for Cancer Research UK and secondly to actually have a lot of fun and enjoyment when we cycled. Boy have we delivered on both fronts.

“We have raised well in excess of what any of us expected – and did we have some fun, no matter what the elements threw at us, how early we had to get up, ferry cancellations or how far we had to travel this group of very special people simply laughed in the face of adversity.

“I have no doubt that it is this sense of humour and camaraderie that helps us get round each year. Well done to everyone who took part, including a few friends and fundraisers from other parts of the UK, Australia and the USA and also to everyone who supported us along the way – we should all be very proud of what we have achieved on behalf of Cancer Research UK.”

Cancer Research UK’s volunteer manager for the North East of Scotland, Dorothy Rodger said: “We are so grateful Walter and Moray Wheelers for organising and taking part in such a tremendous series of events and for raising such a fantastic amount on behalf of Cancer Research UK.

“The money they have raised will significantly support the pioneering work of Cancer Research UK doctors, nurses and scientists, who are fighting cancer on all fronts. I want to say a huge thank you to everyone involved and all those who supported their efforts.”

To find out more about the Moray Wheelers latest challenge or to make a donation, please visit: www.justgiving.com