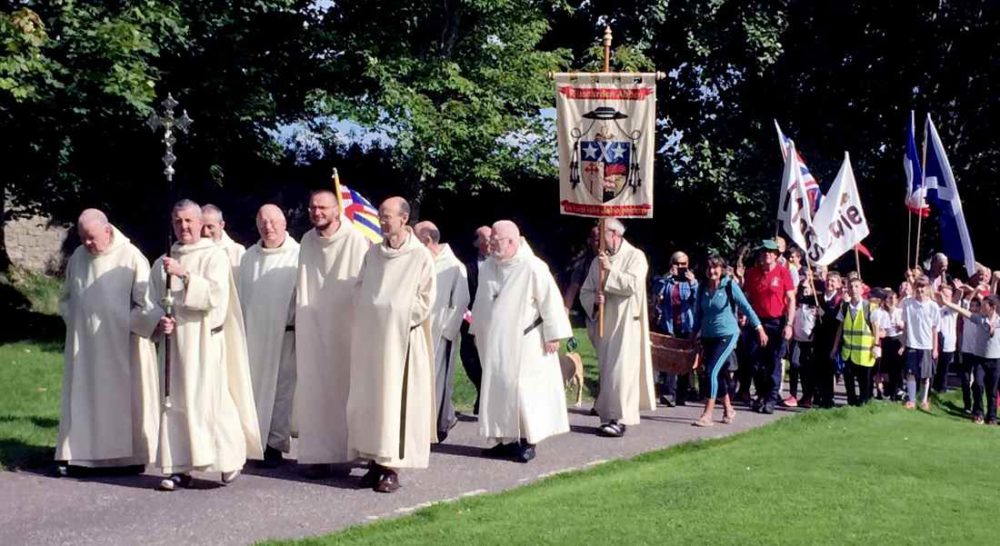 PLUSCARDEN ABBEY’S MODERN-DAY Pilgrims finally reached the end of their epic journey when they proudly marched to the historic Moray site yesterday.

It was the end of a 13-week journey that replicated that of the original Pluscarden residents, who had walked from Val des Choues in Burgundy to Moray some 800 years ago.

The group of around 100 pilgrims were joined by children from Mosstowie Primary School for the final leg of their 1300-mile journey, arriving at the Abbey where a ceremony was held that welcomed the stones they carried from France and which will form the foundation of extensive restoration work on the Abbey.

Around £2million is being raised to fund the works with the pilgrimage raising a portion of that – eventually the aim is to create a women’s retreat house and a more substantial library.

Attending the ceremony and welcoming the Pilgrims home, Moray’s MSP Richard Lochhead said the ‘1230 Pilgrimage’ arriving at Pluscarden was a “very special day in a very special place”. The MSP added: “The abbey owes its foundation to King Alexander II of Scotland in the year 1230.

“The parent house in France is the Priory of Vallis Caulium – today saw the final day of the repeat of pilgrimage of the early monks from Burgundy to Pluscarden which they founded. An original stone from the abbey at Val des Choux was carried on the pilgrimage and is to be the foundation of the new South Range.

“Well done to everyone who took part at one stage or another of the 1230 miles – including for the final stage Mosstowie Primary School Parent Council pupils, parents and teachers.”

More on the Pluscarden project can be found on their Facebook page.