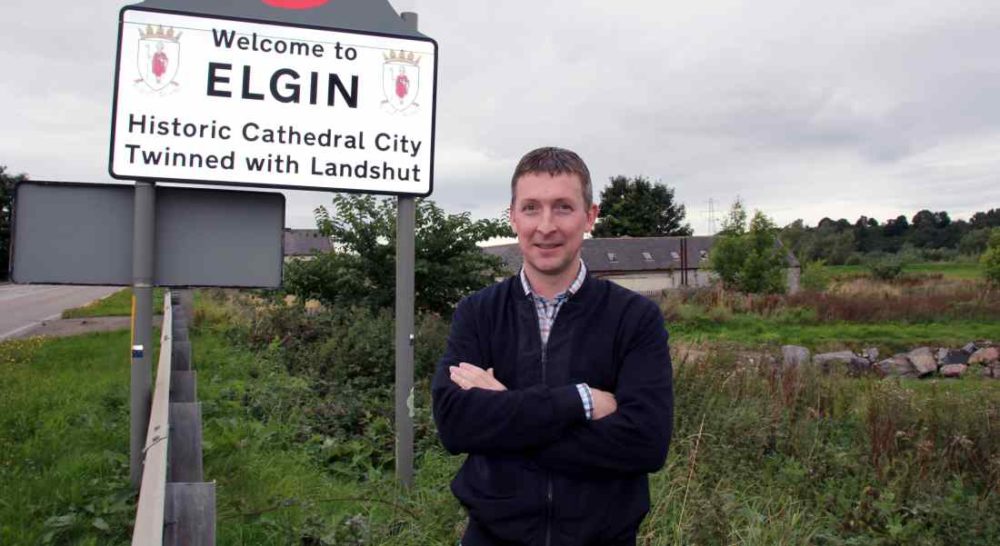 A WEEK BEFORE councillors are being asked to decide on the future of a £3.5million bid to create a new store on the outskirts of Moray, a song has been written questioning why there should be any doubts over the bid.

Tish Tindall, co-owner of the Lossiemouth Entertainment Academy and an accomplished composer and performer in her own right, felt moved to put to music the long fight by Grampian Furnishers to expand and relocate their business.

Ms Tindall, who is a regular customer at the current Lossiemouth store, approached Grampian Furnishers owner Royce Clark with the idea of accompanying “Elgin! Have your lost your Marbles Again?” with a video.

The video was duly shot – using staff from the store and Mr Clark himself as ‘Extras’ – including Mr Clark’s father, who started the business on Lossiemouth’s Queen Street.

Ms Tindall said: “I wrote the song in support of my neighbour and fellow Lossiemouth business owner Royce Clark – it seemed very appropriate that we should put such a high-profile story to music. It’s a bit of fun but of course there is a serious side as well – there is little doubt that Grampian Furnishers is one of the most important businesses in Moray.”

Mr Clarke said: “I’m bowled over by all the support to date and when Tish, a customer and fellow business owner, does something amazing like this it really shows how much this whole project means to the local community.

“I was sceptical at first when she offered to do this – but she really felt passionate about lending her support and her voice, the lyrics and tune are great, Tish is one talented lady.”

Asked about the most difficult aspect of shooting the video, Royce added: “Getting the staff to agree to the video – and it was all very last minute as initially it was just meant to be a song. There is a guest appearance by my Dad in there as well – which was not planned.”

ELGIN! HAVE YOU LOST YOUR MARBLES AGAIN?
By Tish Tindall (c) The Fabulous TT 2017
(In support of my neighbour and fellow Lossie business owner Royce Clark)

Well I went down to Grampian Furnishers, Looking for a chair,
I’d been searching on the internet!
But I couldn’t find one anywhere.
My friend from Aberdeenshire said,
“You have to visit Royce, He’s got lift and tilt recliners In the fabric of your choice!”

I said “I’m looking for a wingback, But I can’t fit it in my car”
He said “Grampian deliver, Just tell them where you are.”
So I popped along to Grampian Just to check out Royce’s choice,
I didn’t get to see him but I think I heard his voice,

He sounded rather tired – perhaps his patience wearing thin?
There seemed to be a battle he felt he could not win?
The Guys said “Roycie has expansion plans to build in Elgin City,
But someone’s put a block on them which really is a pity”

As I looked around the showroom, Still looking for my chair,
I felt the kind of comfort, You feel when people care…
Enough to let you take your time, To try before you buy,
Whoever runs this classy joint, Must be a special guy!
To spread the joy and take this store into a bigger town, Would bring so many customers, From miles and miles around.