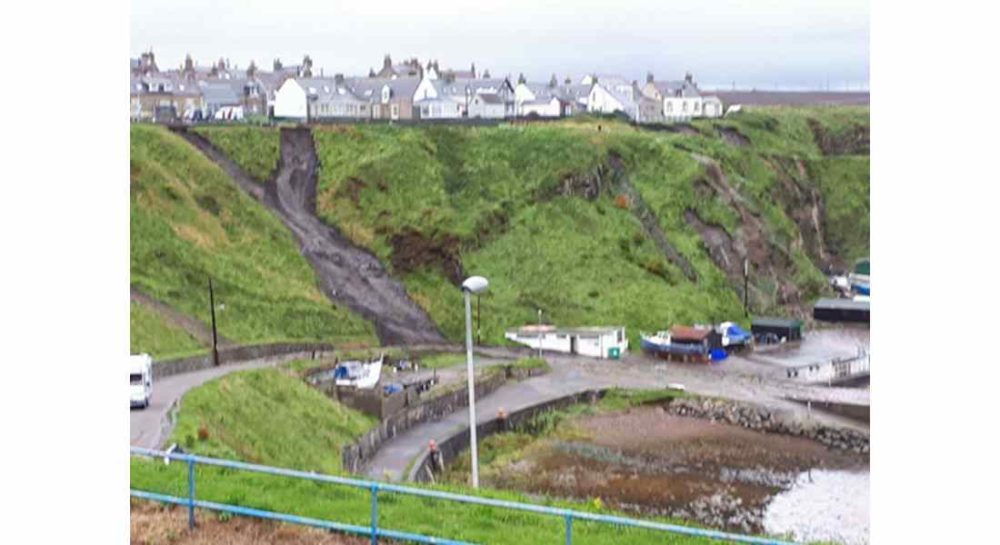 CLEAR UP OPERATIONS will continue today after torrential overnight rain caused part of a Moray golf club to be covered in rocks and rubble.

The overnight downpour struck communities around Buckie, with communities in Portknockie and Cullen particularly badly affected.

Over the border in Aberdeenshire a man sadly died after his car was swept from the road into water in the Burn of Boyne at Tillynaught close to Portsoy. His car had been found submerged in water at around 5.30pm.

Inspector George Cordiner said: “We can sadly confirm that a man has died after his vehicle went into water in Tillynaught near Portsoy this afternoon.

“A significant search and rescue operation was launched in order to trace the man and I would like to thank members of the local community who assisted us and the emergency service personnel who attended.

“Our thoughts at this difficult time are with the family of the man who has died. There does not appear to be any suspicious circumstances and a report will be submitted to the Procurator Fiscal in due course.”

At Portknockie the landslips posed a danger to several homes – with the back garden of one staring over a cliff where before it met a coastal path. Sandbags were deployed in an effort to keep the water away from homes as five separate landslips caused a deluge of soil and rock to tumble from the cliff.

Meanwhile parts of the Cullen Links course had been left covered in debris from the storm – mostly around the ninth hole. Club captain Andrew Murray appealed for help, saying that while they had machinery arriving to clear the largest rocks they needed people to work alongside it.

“We are going to be here every day for the foreseeable future rebuilding the roads and tees on the course,” Mr Murray added.