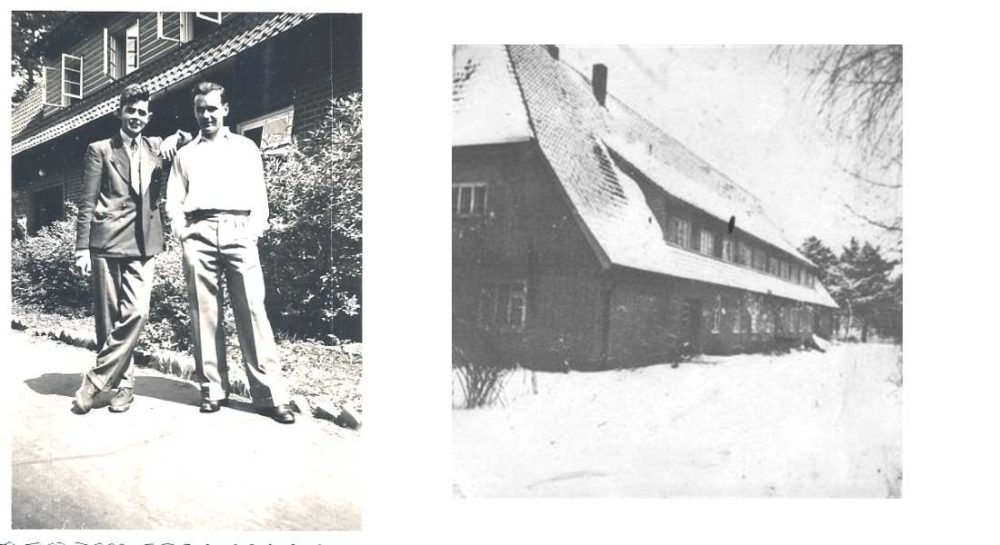 AN RAF VETERAN of the 1950s is hoping that insideMORAY readers can help him locate an old comrade from Forres.

Jim Wilkinson served with Bill Munro who hailed from the Moray town and, in the classic manner that many ex-servicemen now regret, they parted company in 1955 while serving in Germany without exchanging contact details.

Now Jim, who lives in the Dumfries area, has one last hope that someone in Moray may remember Bill Munro or perhaps even Bill himself settled back in Moray and would like to chin-wag with an old friend.

Jim said: “I have always assumed there to be so many William Munros that I would have problems tracing him. Of course, although he was so keen to get home in 1955, he may well have got a job far away – but perhaps he returned to Moray.”

Jim believes that Bill is likely around 83-years-old by now, and served in the RAF from 1952 until his discharge in 1955. In the image above the pair were outside their accommodation at RAF Fassberg in German – Bill is on the right.

Remembering the base was in a forest and the accommodation was pretty good Jim said: “We understood that the airfield was so well camouflaged that it was not discovered until Canadian ground troops arrived – but I never checked records and cannot vouch for that.

“It was only a few miles from the East German border, therefore all the airfield control equipment was in constantly maintained vans supposedly ready to rush west should we be attacked.

“Bill and I were by then about half way through our three-year form of National Service. Three-year men got regulars’ rate of pay.

“We were RT/DF Op 2, and Bill was the only Scot in our team while I was the only northerner, from Sheffield. I cannot recall where he had been serving between training and arriving in Germany.

“I had worked in a Fighter Command RT/DF Fixer station in Essex, a small building by the triangulation point in a sugar beet field, and I had lived in the local pub in a village which still had no electricity and got water from the village pump.

“At Fassberg we were in a crew manning the Homer at the end of the runway – and giving an incorrect bearing might send one of the Venoms or Vampires over the border.”

The pair were both promoted to Corporal, Bill’s stripes arriving first. Jim remembered that Bill had often said he hoped for a posting to RAF Lossiemouth – but as far as he is aware he had no connections with the RAF camp other than his home town being in the locality.

If anyone can provide Jim with any information on his old comrade, they might Email editor@insidemoray.news and we’ll put him in touch.