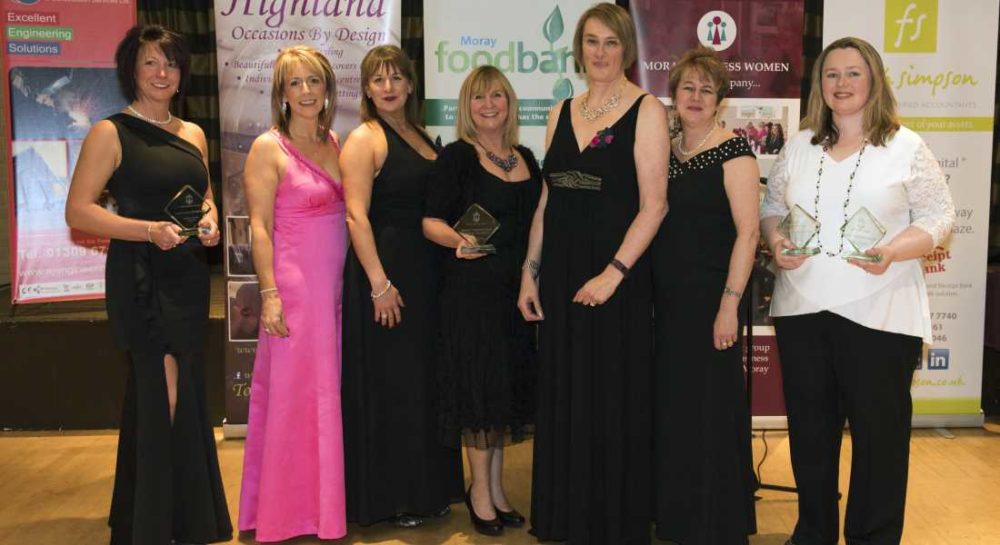 A RETAIL DIRECTOR working in Inverurie has received the highest annual accolade in the Moray Business Women awards held in Elgin at the weekend.

Samantha Dowdall, who was the general manager of Fochabers-based Christies Garden Centre but is now the retail director at Inverurie Garden Centre, was presented with the award of Business Woman of the Year.

The event raised over £4000 for the MBW’s chosen charity, which this year is the Moray Foodbank.

Sarah Frame O’Hare, the founder of strategy Cards, left the event with two awards – the Member of Achievement and Most Enterprising Business. Sarah will also now go forward as Moray’s representative at the Association of Business Women Awards next year.

For the new category of Team of the Year, MWA Tartan Trekkers were rewarded having taken on the challenge of trekking across the Sahara and raising £25,000 for Moray Women’s Aid.

Marie Smith. President of Moray Business Women’s Club said: “The ball was a sell-out event and it was great to see such a diverse group of businesses being represented. Huge congratulations to all of our finalists and the winners.”

She added: “Over the last year we have been supporting Moray Foodbank and we are delighted that in one single night we have raised well over £4000. Throughout the year we have been fundraising at each of our events and we will be announcing the final total at our AGM in December. However, this of course means we are now on the lookout for our 2018 charity.”

Application forms to nominate a charity are available on the Moray Business Women website charity page – www.mbwc.org.uk. They must be emailed to the Club’s Charity Champion Kirsty Watson at kirsty@watsonwoodfp.co.uk by midnight on Friday 8th December 2017.

The shortlisted applicants will be invited to pitch in person at the club’s Charity Launch in early January 2018.

Marie added: “Last year we raised £7000 for Moray Women’s Aid, the previous year £9000 for Lucy’s Fight and this year we are well on the way to a healthy cheque for Moray Foodbank.

“We would urge any local charities to give it a go. It’s not just about the money that is raised but through our networks we are also able to help raise the profiles of the charities that we represent.”

Pic above: From left: Samantha Dowdall who won Business Woman of the Year, the MWA tartan Trekkers Rosie Menzies, Elaine Adam, Elle Johnston, Susan Longmuir and Marie Smith who won Team of the Year and Sarah Frame O’Hare who won Most Enterprising Business and member of Achievement. (Helen Crowley Photography)