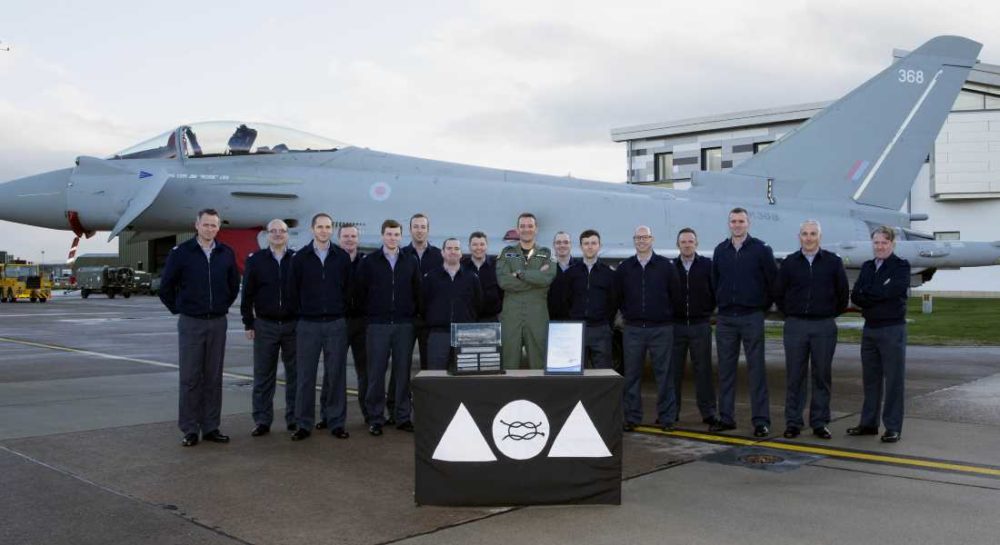 AN RAF LOSSIEMOUTH support team have been awarded the Rolls-Royce RAF Engineering Efficiency Award during a recent event at RAF Cosford.

The 18-strong II(AC) Squadron’s Avionics Team during Operation SHADER have received the award after successfully identifying and rectifying a number of recurring faults in aircraft which were required to fly on operations in Syria and Iraq.

Many rectification tasks on their Typhoon jets involved the replacement of “black boxes” – but on a number of occasions during the deployment the Avionics Team realised that the faults lay deeper within the aircraft.

Once authorised, the Avionics Team completed repairs in situ, which eliminated frustrating repetitive faults, substantially increased aircraft availability in theatre, and eliminated the time and cost penalty of sending components back to the UK for unnecessary testing.

OC II(AC) Squadron, Wing Commander Jim Lee commented: “The award is recognition of the outstanding efforts made by the Avionics Team in support of a particularly busy operational tempo for the Squadron’s engineers this summer.

“Their ability to think innovatively and devise novel solutions to complex problems, in challenging environmental conditions, highlights the importance of having talented people in an age of ever-increasing reliance upon process.

“As a result of the Team’s efforts, aircraft availability remained consistently high, allowing over 99% of tasked Close Air Support missions to be delivered in support of coalition ground forces in Iraq and Syria.”