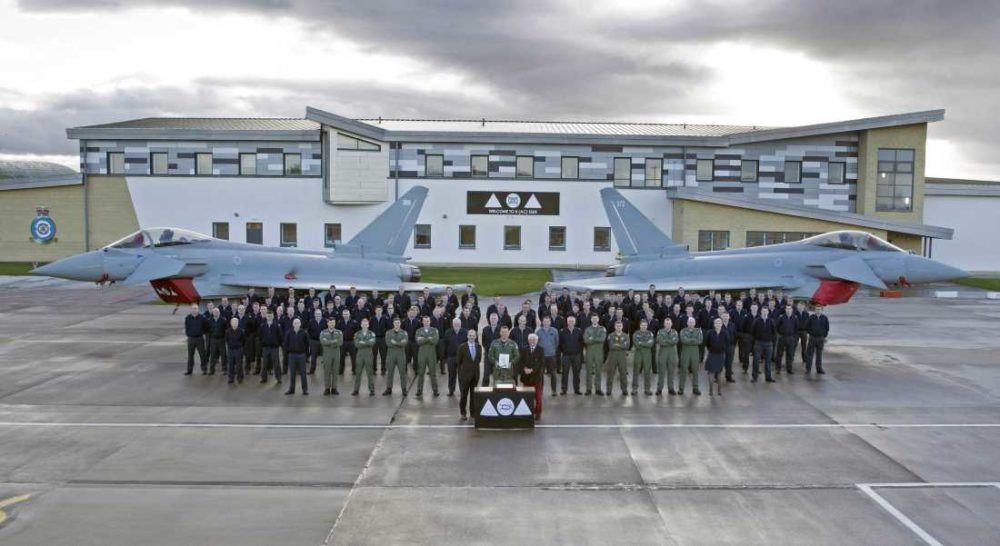 JUST DAYS AFTER one of their pilots received a DFC at Buckingham Palace, an RAF Lossiemouth based Typhoon squadron has been revealed as the best in its group.

II(AC) Squadron has won the Dacre Trophy for its “outstanding overall performance” since reforming with the Typhoon FGR4 at RAF Lossiemouth at the start of 2015.

Barely a year after reforming, the Squadron achieved full operational capability – and moved into its new HQ at Lossiemouth.

Over the following 18 months the Squadron deployed to Amari in Estonia where it provided the UK contribution to the NATO Baltic Air Policing Mission. It then went to Japan and South Korea as part of a major UK Defence Engagement initiative, where its outstanding performance was praised by the Prime Minister.

II(AC) then took part in Exercise Green Flag at Nellis AFB, USA where it completed preparations for deployment on Operation SHADER. From May to September 2017, the Squadron was deployed to RAF Akrotiri in support of Operation SHADER, where it provided vital Close Air Support to coalition land forces in Syria and Iraq as they recaptured Mosul, Tal Afar and Raqqah.

The Dacre Trophy was presented by Air Commodore G B Dacre and his wife in 1951 in memory of their son who was killed on operations over Germany in 1943. The Trophy was originally awarded annually to the most proficient fighter squadron in the RAF.

OC II(AC) Squadron, Wg Cdr Lee said: “It is a great honour to receive the Dacre Trophy on behalf of the men and women who have worked so hard over the last two and a half years to make the Squadron what it is today.

“Their hard work provided the solid foundation upon which we stand today and continue to live up to the Squadron’s motto as ‘Second to None’.”