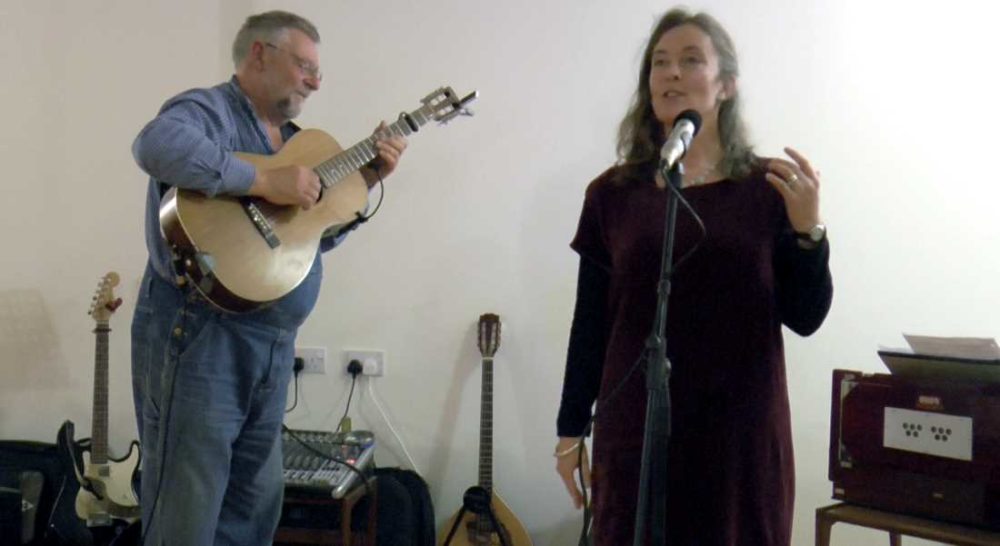 AUDIENCES WERE TREATED to a performance of original songs by local talented musicians Abi Rooley Towle and Jerry Akehurst at two concerts which raised £216 for two charities.

Held at the Kinloss Church on October 28 and in the Sunshine Room at The Park in Findhorn Foundation on November 4, the concerts benefitted first response charity Rescue Global helping relief work in the British Virgin Islands and World Citizen Artists who promote aid work through artistic projects.

Her family have been deployed to help victims and she said the concerts were her way of thanking them for their work and to help raise awareness. Abi also performed a selection of her other songs which are eclectic in style – her performance was as polished as her songs are thought provoking.

Abi is the daughter of the celebrated professional musician Anthony Rooley – and having been raised in a home where baroque/renaissance music was a part of daily life, Abi has absorbed and adapted a variety of styles and enjoys experimenting with unusual sounds and instruments.

For her song cycle about the seasons and award winning ‘When a Child Stands Alone’, Abi was accompanied by Mirabai Sue Musgrave on Indian Harmonium and piano. Abi’s latest song on her forthcoming album ‘Azure Blue’ features a duduk which is a traditional Armenian instrument.

Her songs are both sincere and heartfelt and the audience were spellbound having alighted on a journey of her personal contemplations and reactions to world events. Her chosen subjects ranging from the seasons, everyday life and world crisis.

Jerry Akehurst is a multi-talented musician who is familiar to musical circles in Forres and has been writing and performing original work for almost 50 years. His performance was both understated and self-effacing, but his songs are very well crafted and profound resonating well with the audience.

Mr Akehurst, who lives near Forres, has been writing songs for about many years, but has become more prolific recently since retiring as a social worker. He is also very supportive and encouraging of other artists talents.

He collaborates with many artists throughout Moray and was accompanied at the concerts by Rory O’Connell who played tenor saxophone, clarinet, flute, whistle and Uillean pipes. Mr O’Connell’s supporting instruments enhanced the wistful poignancy of some of Mr Akehurst’s songs and emphasised a rousing emotive quality in others. The two men performed effortlessly as a duo.

Judging by the reaction of the audiences at both concerts Mr Akehurst certainly has achieved his aim.