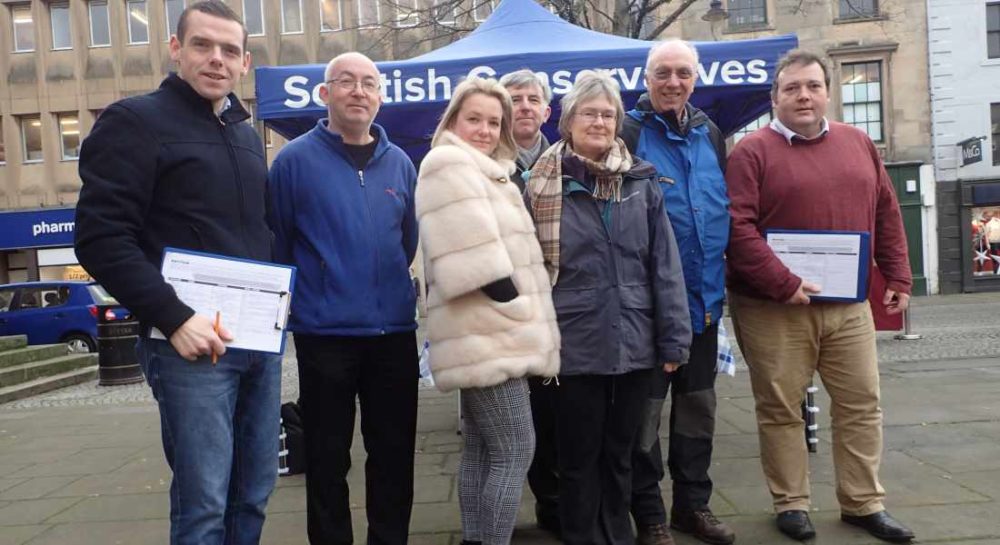 CONSERVATIVE COUNCILLORS WERE supported by their local MP and MSP’s in Elgin at the weekend when they collected signatures petitioning the Scottish Government.

The elected representatives were united in asking the Scottish Government to recognise that the Council has received years of poor financial settlements and that it required support if crucial council services were to be preserved.

Councillor Frank Brown, who represents the Elgin City North ward, said: “We found that local people understood that we are doing our best in very difficult circumstances and that the financial challenges facing the Council are not of our making.

“It is expensive for the Council to deliver services because we are looking after a large rural area with miles of road to maintain and the challenge of funding schools and social care in small communities.

“This needs to be recognised in the support we receive. Other rural areas get extra funding, but we do not. In fact, there are urban areas in the Central Belt that get more support per head of population than we do. That has to change if people in Moray are to receive the services they deserve.”

Douglas Ross added: “Jamie [Halcro Johnston MSP] and I were pleased to be able to show our support for the councillors who are attempting to fulfil the legal requirement placed on them by the Scottish Government to deliver a balanced budget.

“We have asked again and again for more understanding from Nicola Sturgeon and Derek Mackay. They should recognise that the people of Moray are only asking for a fair deal. I very much hope that the petition is successful in bringing an end to years of unfair financial settlements.”