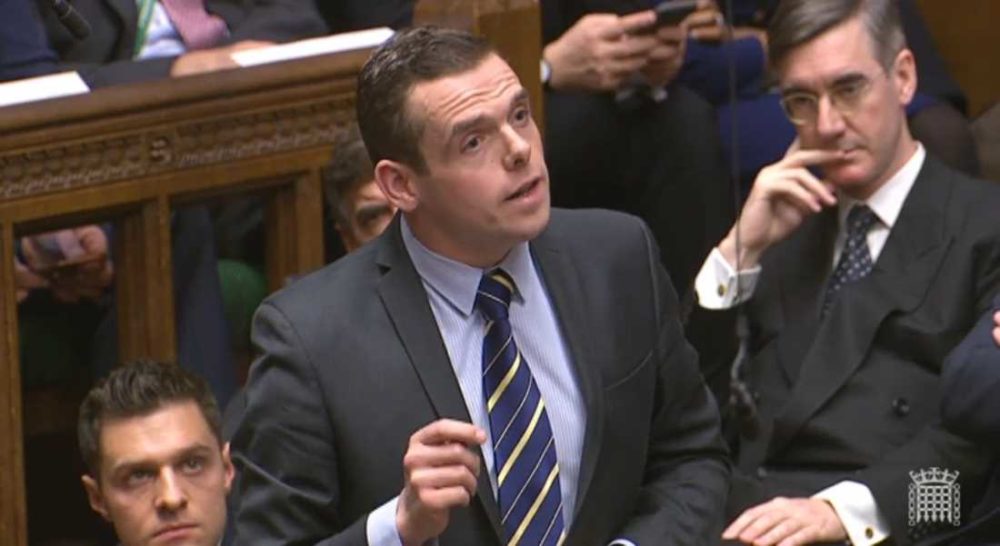 THE CAMPAIGN FOR a fair deal over delivery charges to Moray was taken to the Prime Minister by local MP Douglas Ross on Wednesday.

And in a show of cross-party strength over the issue, it was being debated at Holyrood, where Richard Lochhead MSP led the way with support from all parties in a call to companies to end the ‘rip-off’ charges.

Mr Ross was raised the issue with Theresa May at Prime Minister’s Questions – following which the PM called on the Business Secretary Paul Wheelhouse MP to meet and discuss the issue further with Moray’s MP.

Mr Ross, who has already called for a Westminster debate on the issue, said following PM Questions: “I raised the anomaly of extortionate delivery charges to Moray in my maiden speech when I entered Parliament – and there has been considerable cross-party efforts since then, as it is a hugely important issue to many people in Moray.

“I have been contacted by many individuals and businesses who have been charged extortionate amounts for having things delivered and often point-blank refusal to deliver to our area.

“This problem affects Moray, as well as many other parts of the North East, and has gone on for too long.

“Just this week a report from Citizens Advice Scotland confirmed that up to a million consumers in Scotland pay at least 30% more on average to have their parcels delivered than consumers in the rest of the country which is just scandalous.”

Mr Ross added: “By raising this directly with the Prime Minister I wanted to show how seriously we are taking this at Westminster – and I will be able to use the response the Prime Minister gave me when pressing companies to change their unacceptable practice of inflating the costs of delivering to this part of Scotland.

“I am also looking forward to meeting with the Secretary of State to see how we can progress this vital issue.”

At Holyrood, the call went out to politicians from all sides to put greater pressure on those imposing the unfair charges – and for the first time there are signs that real action might ensue after years of campaigning on this site and throughout the north of Scotland.

Richard Lochhead said: “I believe that December 2017 will go down as a turning point when, with household budgets already under pressure, the people of Scotland will say enough is enough – no more rip-off parcel delivery surcharges.”

In his address to MSP’s, he added: “I ask both Scottish and UK ministers to deliver up to one million Scots an early Christmas present by pledging to tackle these delivery surcharges.”

Last night a spokesman for the UK Department for Business, Energy and Industrial Strategy said that delivery charges should be clear and upfront, adding: “In cases where consumers feel an extra charge is being unfairly or wrongly applied they should take the matter up directly with the retailer or company to make sure they are aware of customer dissatisfaction and potential lost business.”

The spokesman repeated the UK Government’s official line that delivery firms charges are a commercial matter and “should be left to the market”.