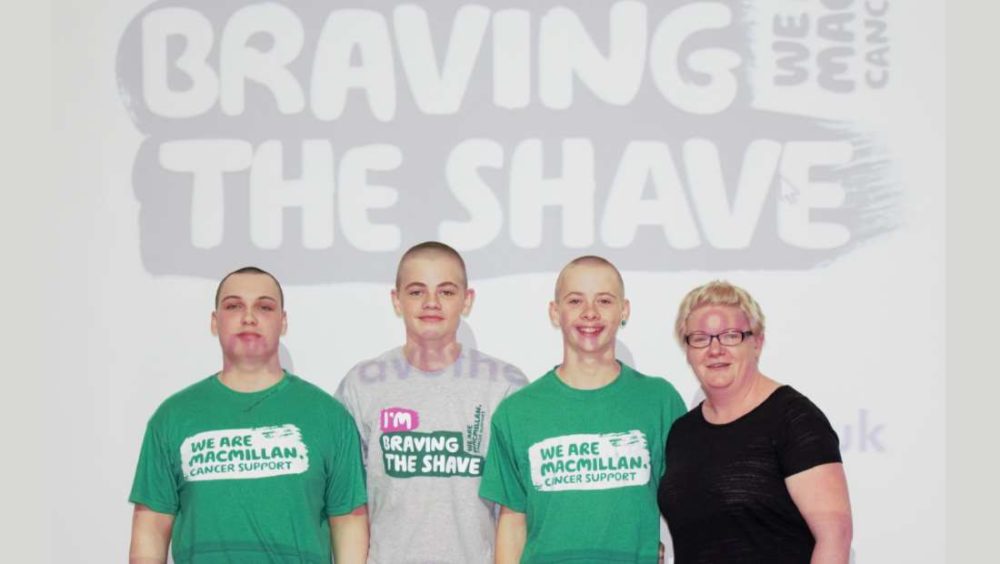 THREE PUPILS FROM a Moray School prepared for Christmas in the most unselfish manner possible – having their heads shaved to raise funds for Macmillan Cancer Support.

The trio from Milnes High School got the idea originally from Thomas Hopkins (15) – who is a fourth-year pupil at the Fochabers school. He roped his brother and fifth year pupil Oliver (16) into the scheme – and the pair were joined by James Poyner (16) also in the fifth year.

Thomas explained: “This is for my family, who have had personal battles with cancer, and for all the other families who have fought, for the winners and for the ones we have lost.”

The boys had their hair cut in the school hall during the lunchtime break, with fellow pupils paying £1 to watch them have their hair shaved off by local hairdresser Hayley Johnston. The event was compered by Principal Guidance Teacher Mr Charles McGuire, with Thomas and Oliver under the close supervision of their mother Mrs Sarah Macrae who was there to record the event on camera. Admiring the efforts of the three boys was Councillor Marc Macrae (Fochabers Lhanbryde), stepfather of Thomas and Oliver, who whilst unable to attend the lunchtime event paid tribute to their efforts.

Councillor Macrae said: “This was a fantastic effort by the 3 lads to raise funds for a very worthy cause indeed.

“Cancer is sadly something which touches almost every family and in many cases it can be the families who need as much support if not more than the patient themselves.

“Many of us have lost close family and friends to this most terrible of diseases and Thomas and Oliver saw this at first hand when I fought my own battle against cancer in recent years, something which I might add was made so much easier to deal with having the support of my family behind me.

“We are very proud of the boys for doing this for charity, knowing just how much teenage boys love their hair.”

Between them the boys have managed to raise around £720 for the cancer charity.