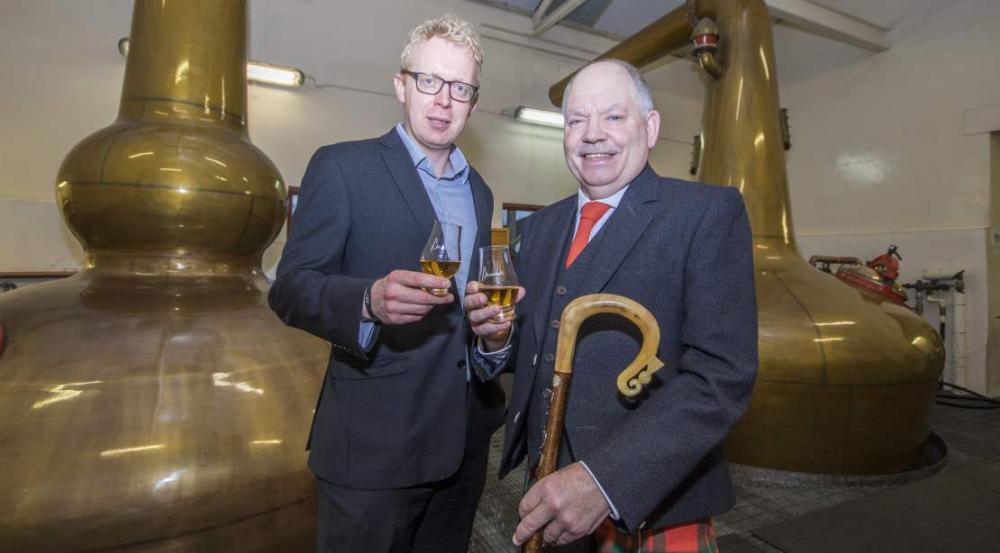 THE FINAL RUNNING of the European Pipe Band Championships in Moray this summer will be led by a man who has been at its heart for six years.

Piping At Forres has exposed the Moray town to an international audience, quickly establishing the town and all of Moray as a place that can more than hold its own when hosting major events.

Now for the final running of the championships in the Moray town, it is a local man who has been at the forefront of its organisation from the start who will act as Chieftain for the June 30 event.

Alan James was revealed at a special event at the Benromach Distillery yesterday as the final chieftain. The local businessman has been chairman of organisers Forres Events Limited for the last two years – and throughout the previous five events in the town has held the duty of accompanying chieftains through their duties at the championships.

Alan said: “Being Chieftain is an honour and having accompanied last year’s Chieftain, Major General Seymour Monro, around the park, and Runrig star Donnie Munro the previous year, I have big shoes to fill.

“I am thrilled to have been asked. I thought long and hard about it as I am already involved in Piping At Forres. However, with Piping At Forres in its final year, there was no way that I could turn down the opportunity. We are very lucky in Forres as we have a significant number of public spirited volunteers including a very experienced leadership team and I appreciate the work that they do.”

Alan James began his work life as an apprentice with William Reid Engineers. He worked his way up through the ranks to become the projects director. However, in 1998, the company went into receivership and Alan used the experience he had gained and set up AJ Engineering & Construction Services in 1999.

Yesterday’s event at Benromach, who have been main sponsors of Piping At Forres from the start, were met by pipers from Forres & District Pipe Band, treated to tattie scones courtesy of Elaine Sutherland from Oakwood Cookery School, who each year organises the World Tattie Scone Contest which is held at Piping At Forres, and of course got to sample some Benromach whisky.

Eddie Tomkinson, a director with Forres Events Limited said: “We are delighted that Alan has agreed to be our Chieftain for what is to be the last in the current series of European Pipe Band Championship being held in Forres.

“In 2012 Alan, together with other local business personnel started Forres Events Limited with the aim of convincing the Royal Scottish Pipe Band Association that Forres would be an ideal venue for the competition.

“Their efforts were rewarded because not only did we secure the initial three-year contract from 2013-15 but, because of the event’s wide success and popularity, it was awarded a further three-year contact for 2016-2018.

“Sadly two years ago two of our directors died, leaving a big gap in the leadership team and Alan agreed to take on the role of Chairman.

“It is therefore fitting that in this, our last Championship in this series, Alan not only leads the team in what will hopefully be a fantastic day for all the competitors, traders and public but also on that day he represents Forres as our Chieftain.”

Ian Chapman is Marketing Director for Benromach: “We congratulate Alan on his appointment as Chieftain of this year’s Piping At Forres.

“This much anticipated event showcases the musical and cultural talents of the participants, while the attendance of locals and visitors is testament to the festival team and our local community spirit. We are immensely proud at Benromach to have been involved with Piping At Forres from the beginning, and look forward to another great year in 2018.”

Alan and Ian can be heard on this week’s edition of Moray Newsbeat which will be broadcast on MCNR at 7pm this evening and on KRC107.7FM at 7pm on Saturday evening.