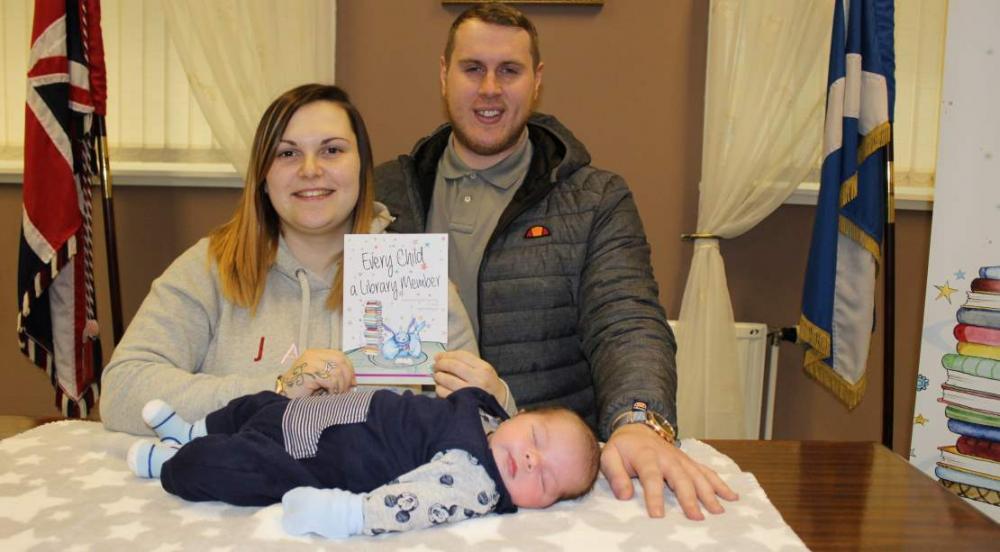 THE MORAY BABY who was born just ten seconds into the New Year has claimed another first, the youngest library member in the UK.

Harry was born at Dr Gray’s Maternity unit as the bells were still sounding around the country, his parents Amy Coull and Craig Ferguson having expected his arrival a week earlier – on Christmas Day.

This week they were handed a new library card as Moray Council is a pioneer of a ‘membership at birth’ scheme, providing all new-borns with an automatic membership. That is aimed at encouraging parents and children into an early reading habit.

Since it was introduced in Moray two years ago other Councils have followed suit. Senior Librarian Jane Sandell presented Harry with his membership card and some picture books to get the young man started, saying: “It’s really is never too soon to introduce babies to books, and we have lots for him to choose from.

“We hope that first-time parents Amy and Craig will enjoy using the library too – we have lots of books on parenting!

The handing over ceremony took place as Harry’s birth was being formally registered, with Senior Registrar, Heather Grieg, saying it set a new milestone for her: “I’ve been a registrar for 30 years next month, and this is the first time I’ve recorded the time of birth as four zeros – we don’t record seconds.”