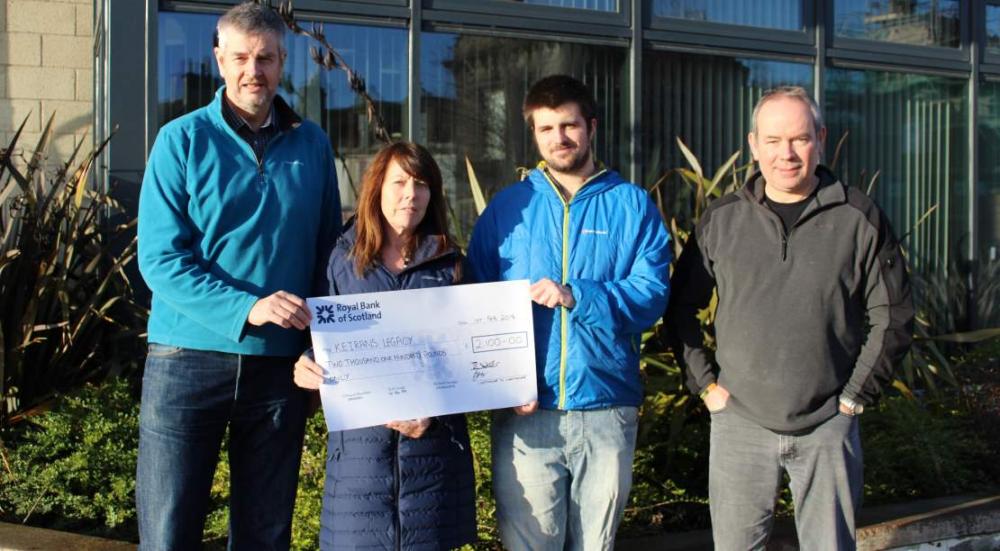 BIG-HEARTED STAFF at Moray Council have helped raise over £2000 for the local Keiran’s Legacy charity, set up following the tragic death of a 16-year-old two years ago.

Keiran McKandie’s friends and family created the charity which has already had a major impact on the wider use of defibrillators, with many of those donated already in use in Police patrol vehicles around the north east.

The charity has also placed several of the life-saving machines in local communities – including one at Elgin Academy, where Keiran was a pupil.

David Sweeney, an architectural assistant within the council’s housing and property section, organised a ‘dress down day’ – and those taking part in the monthly event donated £2 each time, allowing them in the last year to raise £200 for the charity.

David said: “Lots of people here knew Keiran, know the family or have kids that age themselves. It’s a charity that’s very close to our hearts.”

The duo set off from Ardnamurchan and endured heavy showers at the start of the challenge, which eased off and a tail wind saw them ahead of schedule and able to conserve some energy for the gruelling 236 mile cycle. The pair were supported by colleague Stewart Taylor who ensured they were well fed and on hand to repair any bike-related faults.

They said: “Neither of us suffered any mechanical breakdowns, but sitting on a bike all day did take its toll on our bodies. Stiff and sore shoulders became the norm, with liberal reapplication of Chamois cream on the more delicate body parts to minimise aches, pains and chafing.”

Keiran’s mum, Sandra, visited Moray Council’s HQ to receive the cheques for £200 and £2,100 respectively.  She said: “As Keiran’s advocate, I want to sincerely thank all the staff for everything they’ve been doing to raise money.

“This is about Keiran contributing to society and how he continues to make a difference even though he isn’t here anymore – that’s just the type of lad he was.  I think a lot of people knew Keiran and he has touched a lot of people’s hearts, many that we weren’t even aware of. He just loved life, sports and people – he was always smiling.”

One defibrillator including training, a prep kit and secure casing, costs around £1500. Those interested in fundraising for Keiran’s Legacy you can get in touch by Email to keiranslegacy@outlook.com.

Sandra is currently putting a team of walkers together for Aberdeen’s Kiltwalk later this year.