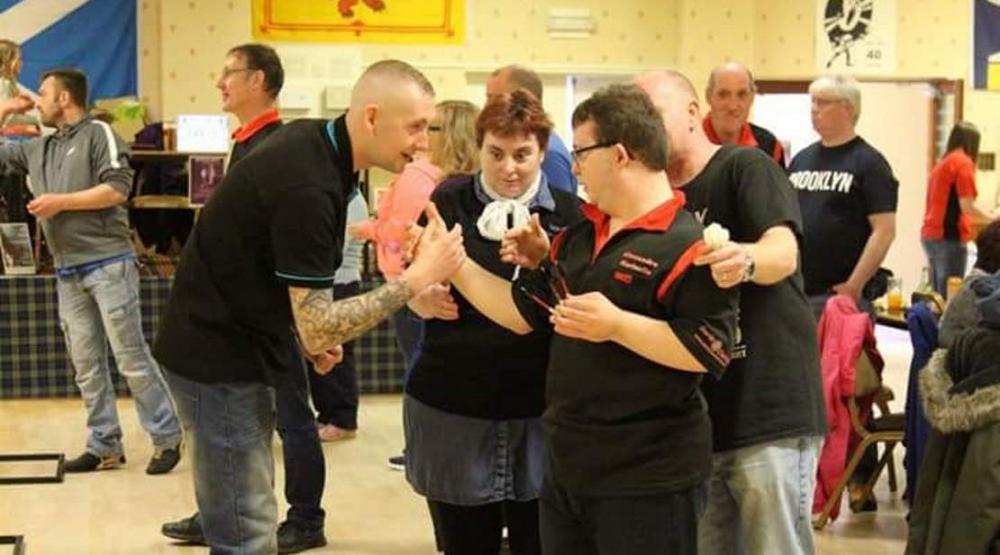 A MORAY GROUP THAT seeks to inspire people with learning difficulties through participating in Darts has organised a tournament in Elgin aimed at raising the profile of their unique and worthy cause.

Shelley Ritchie formed ‘Inspiring Darts’ after working with a man who loved to play the game – but could not find a team that he would play in.

Now the group have 20 players – and many more on their waiting list for their meetings every Tuesday at Pinz Bowling in Elgin.

Shelley explained: “As well as playing normal darts games like round the clock, we also play games designed to encourage players aiming by giving rewards as an incentive. One of the games I created is a game with water balloons – these are placed around the doubles on the dart board.

“Inside the balloons are small prizes or raffle tickets. Each raffle ticket is marked with a prize, which they can collect when they have burst the balloon with their darts.

“At the end of each month the team members have the chance to shake things up and do something different. On the last Tuesday they have the choice to play bowling – and the winners get medals to keep and take home. We also have games of pool and air hockey – and we have even had shots of the bull!” The group has provided a great way of meeting new friends and building confidence, as well as reducing poor mental health among members.

“The group gives them the chance to be just like anyone else who plays darts. They have a practice, play darts, work as part of a team, win trophies and medals for their achievements. They have a drink, some play the bandit and we all have a good time together.”

The group is expanding its activities with the help of Pinz, who Shelly says have been particularly great in helping their development. A second group will be held each Tuesday after the current one, with one group meeting from 5.30pm to 7pm and the second from 7pm to 8.30pm.

Shelley added: “We couldn’t have run the group without our volunteers though, they are all amazing people. Most of our volunteers have darting experience which is a great asset to the group. “When counting scores we need to be able to add and subtract fast to keep the flow of people moving. We all work together and put in our ideas and run the group the best we can with new exciting ways to practice.

“I have not seen another darts group of this kind anywhere – and I am pleased to say that we are very popular and in demand.”

The group organise all their own fundraising – and that will include a special mixed-doubles tournament on March 4 at the Kirkie Bar in Elgin. Entry for the Adults tournament is £3 per person and for the Under-16’s singles tournament it is £2 per person.

Anyone wishing further information on the group or the tournament can email Shelley at inspiringdarts@outlook.com or search for the group on Facebook.