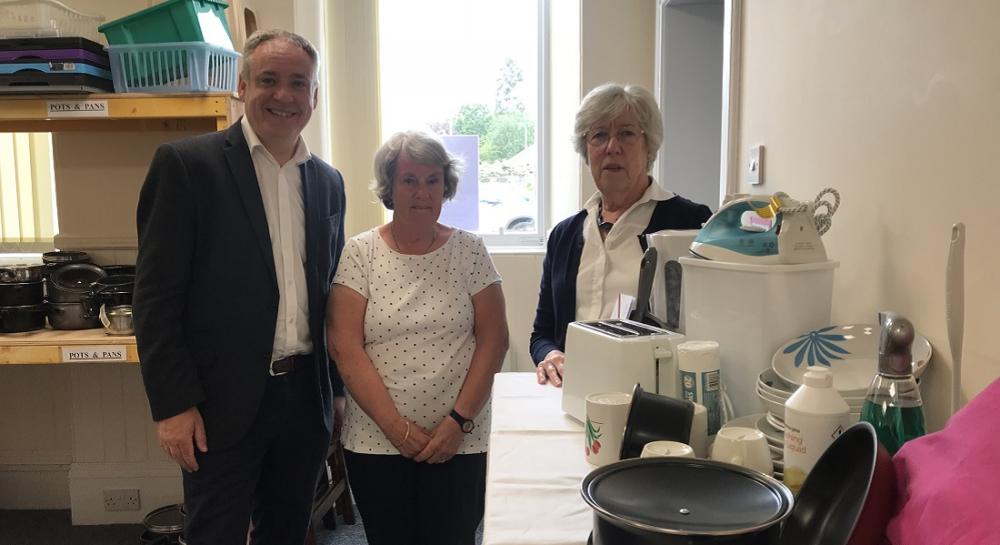 Moray’s MSP, Richard Lochhead, visited the Moray Fresh Start office to meet with the charity’s Chair, Mary Nelson, to learn more about their work and how they help people who are taking on a new tenancy but who can’t afford the thing they need to make their new house a home.

Moray Fresh Start told Mr Lochhead they are actively looking for new volunteers to make up new home packs, as well as looking to recruit people onto their board.  The MSP is now encouraging folk in Moray who have some spare time to get involved with the charity to help vulnerable people and families in local communities.

Commenting, Richard Lochhead MSP said: “Moray Fresh Start is a fantastic local charity that provides vulnerable individuals and families with the items they need when moving into a new home – things that many of us take for granted.

“In order to do this good work the charity relies on volunteers giving up a bit of time to make up new home packs and get them to those in need, and as the demand for this kind of support increases so does the need for Moray Fresh Start to recruit more volunteers.

“I’d encourage anyone who is interested in getting involved in the board or in volunteering at the Moray Fresh Start store to get in touch with Mary to find out how they can play a part in this invaluable local initiative.”

Mary Nelson, Chair of Moray Fresh Start added: “Already this year we have given out nearly 100 packs of basic necessities which has helped people between the ages of 16 to over 70 years, many of whom have sad stories to tell but are so appreciative of our assistance.

“We’re totally dependent on donations of goods that have been gently used such as crockery, cutlery, pots and pans, and bed linen.  We also rely on our fantastic team of volunteers and are always looking for new people to get involved.

“We also raise awareness of the charity by giving talks to schools and local organisations and would be happy to meet with any groups who’d like to learn more about what we do.”