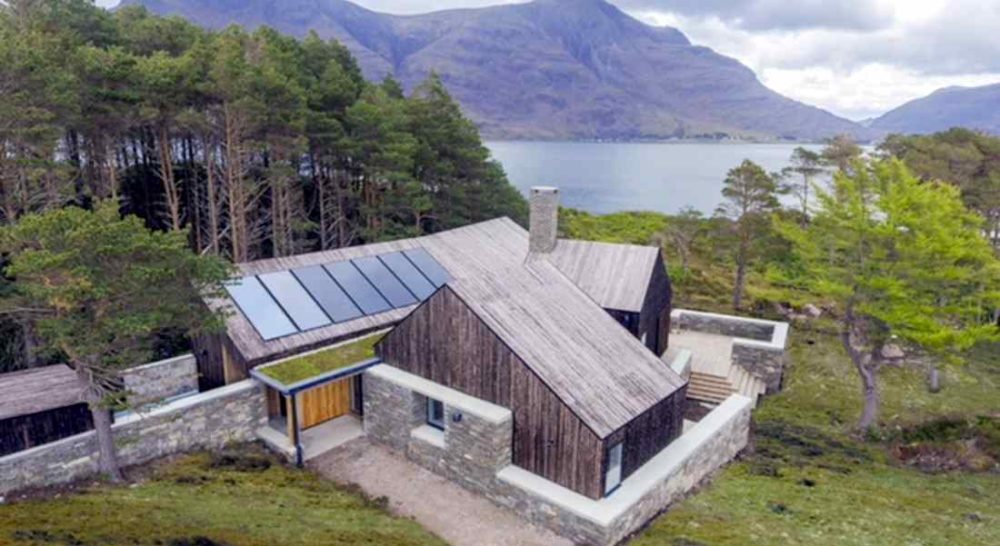 A Moray solar company that helped build the UK’s House of the Year has won a new award for energy efficiency at the same property.

AES Solar picked up the Best Energy Efficiency in a House Design or Build at the Highlands and Islands Renewables Awards in Inverness last week (25.04.19) after being shortlisted for its work on Lochside House in the far north-west Highlands.

Now in its 40th year, AES Solar is the longest established solar company in Europe and specialises in PV (photovoltaic, i.e. generating electricity from sunlight) and thermal systems; it manufactures its own solar thermal panels at its headquarters in Forres.

Commercial Director Jamie Di Sotto said: “The property we submitted for this award is an outstanding example of energy efficiency and demonstrates how important it is for solar power to be built in at the design stage.

“We worked with the architects, builders and electricians to deliver an off-grid system that powers the house without reliance or resort to external power.”

Lochside House in the north-west Highlands was voted ‘House of the Year’ in 2018 by Channel 4’s Grand Designs, when judges commented that ‘everyone can learn from designs like this.’

Operations Manager Josh King, who oversaw the project said: “This kind of design and installation demonstrates the importance of our expertise and quality.

“The remoteness of this property was a challenge for all concerned, but working together from the outset, we liaised with the architects, builders and electricians to combine skills.

“In the same measure, this project makes the case that off-grid solar power in the north-west of Scotland is not only a reality but sets an example for the rest of the country.”

The remote property’s combination of solar thermal and solar PV means the property is powered completely by the sun with no external power source and free from electricity and heating bills. There is a diesel generator which acts as an emergency stand-by, but has rarely, if ever, been used.

Managing director George Goudsmit added: “The longevity of AES Solar means that we have built a specialist expertise that attracts projects like this. After four decades of specialising in solar, we can adapt to any challenge.

“Off-grid systems are becoming increasingly popular, and awards like this demonstrate that we can deliver.”